Equality Under The Law... 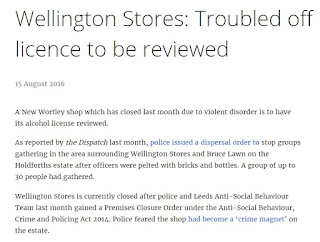 Email ThisBlogThis!Share to TwitterShare to FacebookShare to Pinterest
Labels: identity politics, one law for all, policing

"The Authorities" have one agenda...

Is it the premises or those who use it the problem. If it is the former then that means the owners of the premises must be inciting the behaviour and/or not taking the appropriate actions to deter it. In which case the case for closure of the premises or the event not taking place is made. If the owner is not inciting it and does take appropriate action as far as it is possible for that owner then the decision whether a premises or event is allowed to stay open or take place becomes difficult. The default position for authority of course is close and stop. For them that is the least arduous position. The innocent are then punished alongside the guilty making "equality under the law" a sham.

Sometimes though public pressure forces them to do their job so they have to police premises and events to the best of their abilities so that they can stay open or take place. An inconsistency that also makes "equality under the law" a sham. There is a lesson to be learnt from this for the egalitarian brigade. Equality is a pipe dream as natures forces precludes it's existence so chasing after it is a wasteful use of human time, energy and resources. We may hanker after equality but human nature, differing abilities and mindsets will ensure that there will always be obstacles in the way of achieving it.

Did Notting Hill Carnival again this year.Roughly my twentieth time.However it will be my last.
It will never get banned.
Jaded.

If a festival celebrating English/European culture had the same levels of violence and criminality as the Notting Hill stabathon it would have been banned after the first year.

Well, I was at the Shrewsbury folk festival. 4 Days, loads of beer drunk late into the night, lots of (often very loud) music, dancing, singing and fun. 7000+ people of all ages having a 4 day party.
As far as I know nobody hurt anybody, nobody got into a fight, everyone was friendly, considerate and pleassant to everyone else. There was no vandalism, there were no arguments, there was no litter on the ground. You could talk to anyone and get into a conversation and make new friends. There probably were a couple of policemen on duty, but I didn't actually see one, nor see any need for one, at any time during the festival.
When we left the camping field was spotless, no mess, no litter, just a few light patches of grass where the tents had been.
Folk festivals help restore one's faith in one's fellow man!

Like Jaded I have policed too many carnivals. I always found it unpleasant, squalid and dangerous. Like New Years Eve it was an event where I was seriously worried that people could die, not through crime but through crushing. I now actively avoid crowded places.
The carnival will not be banned. Even if it was you would still need the same numbers of police officers deployed as people would turn up anyhow. I have attended meetings with the overall carnival organisers, and I use that term very loosely indeed. One year one of the organisers wanted 'the police to put up grandstands so people could get a better view'. He was told, very politely, that it was not a police carnival and that if the NHC committee wanted grandstands they could sort it themselves. Needless to say nothing happened. I believe that the event does not have an overall licence and that the individual sound systems, foodstalls must seek a licence from the local authority. It will need a long term approach to 'de-fun' the event by continually enforcing earlier close down times and refusing a license the following year for those systems that don't close down on time and refusing to allow anyone else to use the site. It will require things you don't really like, such as licensing, inspection and enforcement and a lot of boots on the ground. The effects of the carnival spread far and wide. There was a murder in Slough last year that was related to an earlier disturbance at the carnival. I also recommend you have a look at the 2003 Licensing Act. It places strong obligations on licensees to prevent crime and disorder etc and gives powers to police and local authorities to close troublesome premises. Like Woodsy I have policed (or rather not policed) events which looked after themselves. It all depends on the demographic I suppose.
Retired

""The Authorities" have one agenda..."

And it's not compatible with mine...

"The default position for authority of course is close and stop. For them that is the least arduous position."

I could put up with collective punishment if it was at least applied to all. But it's not.

"However it will be my last.
It will never get banned."

Congrats. And I fear you're right.

"As far as I know nobody hurt anybody, nobody got into a fight, everyone was friendly, considerate and pleassant to everyone else."

It can be done. So we are entitled to ask why, in so many cases, it isn't.

"I have attended meetings with the overall carnival organisers, and I use that term very loosely indeed. One year one of the organisers wanted 'the police to put up grandstands so people could get a better view'."

The entitlement of these people beggars belief!

"It all depends on the demographic I suppose."

But is it colour? Or class? Or something else?

It must be some combination of race, class and age.