Why Do Newspapers Ask Questions They Can Already Answer? 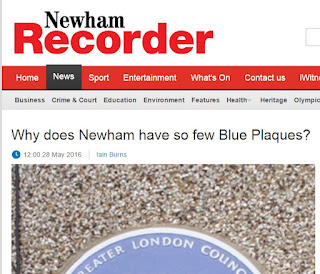 The reason the borough is so deprived of plaques is because so much of it was destroyed by the twin traumas of the Industrial Revolution and the Blitz.

To qualify for a plaque, English Heritage requires that buildings associated with the great figure “survive in a form that the commemorated person would have recognised” – impossible in a place like Newham.


...if the scheme is still going nearer the end of this century, we can expect a trip to Newham to include a feast of blue plaques – Jermain Defoe, Lennox Lewis, Idris Elba, Ray Winstone and, of course, Danny Dyer.

You're 'aving a laugh, ain'tcha?


In the meantime, perhaps England’s first non-white under-18 footballer – West Ham’s John Charles, who was born in Canning Town’s Ordnance Road – could be the next figure given a plaque.

Of course! Can't keep identity politics out of anything, can we?
Posted by JuliaM at 09:30