The best friend of a pregnant woman who was allegedly stamped on by a group of students during a horrific attack says she is disgusted that the case has been closed by police.

Harris Girls’ Academy Bromley apologised yesterday after the woman accused students of repeatedly stamping on her after she intervened to stop a young girl from being bullied.

The victim, 19, who is three months pregnant, was left fearing for her baby’s life after the attack outside Penge Sainsbury’s on May 13 at around 5pm.

Hmmm. Doesn't sound like the behaviour you'd expect from their publicity material: 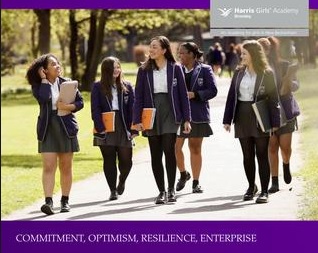 The school is also an Ofsted 'success story:

So how to square this circle? And how can the case be closed by police?


A police spokesman has told News Shopper that the case is now closed. This is despite a 13-year-old girl being arrested.

The statement read: "Police were called at 16:55hrs on Monday, 13 May to reports of a fight on High Street in Penge.

"Officers attended. A 19-year-old woman is reported to have been assaulted by a group of teenage girls when she intervened upon seeing them surrounding another teenager.

"A 13-year-old girl was arrested on suspicion of assault and taken to a south London police station.

"The victim was conveyed to hospital where she received treatment for minor injuries before being discharged.

"The case has since been closed due to a lack of evidence."

There's no CCTV? Really? In Penge High Street?
Posted by JuliaM at 09:00

Probably started it. She's clearly no self control

If the aggressors were wearing school uniform, a formal complaint can be made to the school and Ofsted, though the latter is a bit of a toothless tiger. A bit of publicity regarding the response from the school would also help those thinking of sending their children there. A private prosecution against the girl arrested (crowd funded?), and the resultant publicity, may concentrate the minds somewhat.
Penseivat

"Probably started it. She's clearly no self control"

"If the aggressors were wearing school uniform, a formal complaint can be made to the school and Ofsted..."

Futile. The schools clearly don't care about adverse publicity, or my c2c commute in term time wouldn't be the nightmare it is...