In February, the court heard Mathers told police she believed another dog caused unmuzzled Rusty problems, which sparked the attacks.

Appearing today, prosecutor Michael Mason told the court Mathers hit and slapped the dog for misbehaving, at which point it bit her arm. He said Rusty was a very powerful dog that should have been muzzled in public, and police had requested Mathers be banned from keeping another dog.

So that when it goes nuts and mauls its owner and her cousin, then traps a couple in their car, they don't have to rock up and shoot the thing five times.

After trying - unsuccessfuly - to run it over, dogs being a smaller target than cows....

Kelly Brocklehurst, for Mathers, said she was a very vulnerable adult whose history of mental health problems and domestic violence abuse caused her to look to animals for comfort and companionship. He said an incident of such a scale was not reasonably foreseeable, and Mathers didn't need more punishment, but instead help.

Help to what, not own four legged killing machines..?

Mathers was given a four-month prison term, suspended for two years, to include 20 rehabilitation days. She was disqualified from owning a dog for five years, and ordered to pay a surcharge of £128.

Judge Melville described the case as an example of a dog owner losing control of a dangerous situation, and said Mathers' drinking on the day likely damaged her decision making.

Which, given she decided to weigh in on the comment thread about her sentence, aren't that good in the first place: 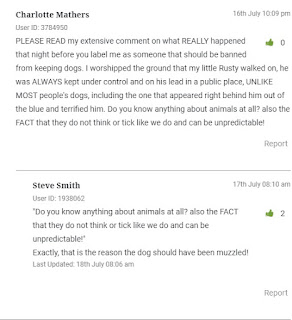 Oh, Steve, you're trying to reason with someone who doesn't respond to reason. You'd have more luck reasoning with Rusty, after he bit the bullet(s)...
Still, lucky the cousin was around to spare her far worse injuries, I bet she's greatfu... 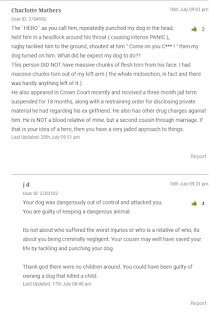 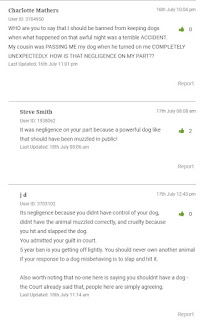 Now, what accounts for Judge Melville's decision to let this total loon get anouther pitbull in five years time?