A man had his hand cut off after being attacked with his own machete by angry vigilantes, according to locals.

No, not South Africa, Dhaka or Rio De Janeiro, this is Khan's London.

A councillor wrote on Facebook that locals had cornered a man who had reportedly brought a machete to the scene. He wrote: “Yeah...you don’t mess with the people of Tower Hamlets.

“On a more serious note: Armed with machetes, this group has allegedly targeted innocent people in that area a few times. Locals decided to take matters into their own hands. “Nobody should ever condone vigilantism like this but it should also be a lesson for people who carry knives: your weapon can easily be turned against you.”

Locals..? Have the Pearly Kings started a vigilante group? 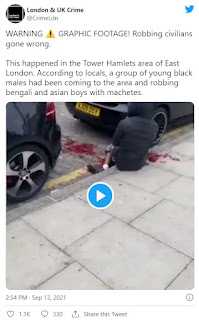 A nearby shop owner said police closed off the street very quickly and he had heard from customers the man’s hand was cut off. Drill rapper Ak6ix7even said people had released “fake news” of him being involved in the attack after a photo emerged of him being arrested.

Good old London. So much better for having new blood, even if it is mostly on the streets, I suppose...

The sound of one hand clapping ?
Jaded