Yesterday while sitting down to a nice curry at teatime, I nearly choked on a poppadum when Dal Babu was asked on BBC News to comment on the case of a man wrongly Tasered by police who'd smashed down the door of the wrong house:

A pensioner who was tasered by armed officers after they allegedly raided the wrong home has said he feared being shot and killed in his dining room by “police thugs full of testosterone”. Roy Morton, an 80-year-old former ballet dancer, was woken by the sound of police “smashing down” his front door in Cricklewood, northwest London, at about 7am on Tuesday last week.

Surprisingly, instead of thundering about "the cultural aspects that might be misinterpreted as being aggression within a particular community" or wondering if police 'would have dealt with this differently', he was quite non-committal, declaring that there was an ongoing investigation and everyone should wait for the outcome of that. It was such a bland statement I wondered why they bothered to get him on the line for a quote at all.
The interview isn't available on the BBC to link to. In fact, you won't find this case mentioned at all this morning.
I wonder why? 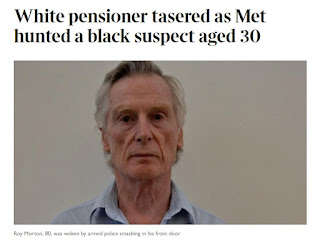 How is it possible to be that incompetent and still be in a job? I spent my working life in engineering and I'm struggling to think of any kind of cock up that I could have made with an equivalent level of idiocy and harm.

The police have gone downhill since someone had the idea that they should accept a university degree as a mark of intelligence. Looking at what the universities are turning out I would not employ any of them as engineers, they might be able to push a broom round the shop floor or ask if you want fries with that.

The whole farce needs re-evaluating and all the dead wood removing. If that means starting from scratch, so be it, we the people that pay for them might actually get what we pay for.

"How is it possible to be that incompetent and still be in a job?"

Beats me. They can't even fall back on the 'it was dark, sarge!' excuse, given they all had torches!

"The police have gone downhill since someone had the idea that they should accept a university degree as a mark of intelligence. "

Spot on. And I fear it's far too late to ever reverse it.