One of Britain's top ethnic minority police officers has accused chief constables of not understanding the need for more black and Asian recruits.

Ch Supt Dal Babu told BBC News many of his colleagues just "don't get it". Ch Supt Babu, 49, who retires from the Metropolitan Police on Monday after 30 years' service, said "radical measures" were needed so police had a better understanding of different cultures.


Ch Supt Babu - who is of Indian heritage and helped found the National Association of Muslim Police - said there was a "business case" as well as "moral" reasons for raising numbers, particularly in specialist units.

He said: "It's about having that cultural understanding when you're planning the firearms operation - do you understand the cultural aspects that might be misinterpreted as being aggression within a particular community?"

I'm sorry. I zoned out there for a minute.. 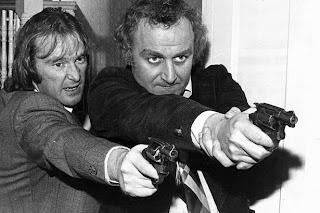 "But guv, 'ave we considered the cultural aspects of our aggress.."
"Shut it, George!"

"Do you understand when communities are praying on a particular day?"

Well, good god, Dal ol' chum, they sure ought to, given the appalling amounts of time and money spent on such things! The fact that they don't let that change what they have to do (they don't, do they?) is a good thing, not a black mark against them!


Sir Peter Fahy, who leads on workforce development for the Association of Chief Police Officers, denied chief constables were to blame, saying they had been left "frustrated" in their attempts to recruit more ethnic minority officers by existing employment law.

Sir Peter said: "We need a wider interpretation of the definition of 'occupational requirement'," adding that currently, if chief constables wanted to recruit officers who had an understanding of a particular national or ethnic group, they had to "dance on a legal pinhead" to do so.

As I should bloody well hope, too!

So...why is he the ex-Ch Supt Dal Babu..? According to the 'Guardian' article, he left under a bit of a cloud:


Babu was turned down for a place on the strategic command course in 2011 and he chose to retire.

Ah. It seems he wasn't up to snuff, despite his impressive paper qualifications, then?


...but was considered unsuitable to assume chief officer rank because his media interview skills were not deemed good enough.

Ouch! In a police farce that includes such luminaries as Sue Simm, who presumably was found good enough, that must be bad...


His personal file – which he has seen – contains the comments: "This officer is over-racially sensitive".

You'd have thought from the coverage in the lefty press that Dal Babble had resigned on a point of humour or principle. Nah....he just threw his teddy in the corner and having done his 30, put his papers in to retire on a chief super's pension - and a nice commuted lump sum and need in reality never work again. If he didn't pass the selection process for the SCS...these days... he must have been pretty poor. One can only imagine how the selection process for any form of promotion within the UK police service has been affected by equality and diversity laws and procedures. WHilst he probably looked good on paper, or in a local newspaper article - in reality he just wasn't deemed good enough in the flesh or live on TV PLUS I'm not sure Harrow Borough OCU was performing spectacularly well under his alleged leadership. Fuck off Dalwardin, take the money and run - you did well to get to skipper by all accounts, now go and join that other great Muslim police officer - Tariq Ghaffur who is...errr...doing...errr. sweet FA it seems.

What gets me is that this selfish wanker in making his pathetic remarks has no thought whatsoever for the thousands of colleagues of all ranks who are seeing their pay/pensions and conditions of service change....let alone the moratorium on promotion until after this summer at the latest. As usual with these particularly cuntish bastards it's all ME, ME, ME!

He did say that special measures were needed when dealing with minorities, I have to agree. A battalion of infantry with fixed bayonets would have worked wonders during the riots, or the Manchester Yeomanry in their prime.

He's only read about half of the hallowed principles:

The basic mission for which the police exist is to prevent crime and disorder.

The ability of the police to perform their duties is dependent upon the public approval of police actions.

Police seek and preserve public favour not by catering to public opinion, but by constantly demonstrating absolute impartial service to the law.

Police use physical force to the extent necessary to secure observance of the law or to restore order only when the exercise of persuasion, advice, and warning is found to be insufficient.

Police, at all times, should maintain a relationship with the public that gives reality to the historic tradition that the police are the public and the public are the police; the police being only members of the public who are paid to give full-time attention to duties which are incumbent upon every citizen in the interests of community welfare and existence.

Police should always direct their action strictly towards their functions, and never appear to usurp the powers of the judiciary.

The test of police efficiency is the absence of crime and disorder, not the visible evidence of police action in dealing with it.

So in 30 years in uniform between setting up sectarian staff organisations, race-hustling and bleating to the press ("I could've been a CONTENDER!") is there any evidence tha Dull Baby actually did any, you know, coppering?

Or how about all the damn ethnics in our land who dont like our culture and laws and dont wish to obey them just fuck off to the 3rd world shithole of their choice.

The logical conclusion of his demands would be a requirement for ANY person reporting a crime to describe their "ethnicity" and that of their surroundings, so the appropriate response can be sent...

If that means I can ask for a Sweeny look-alike to come and deal with the little scrotes who tip my wheely bin over for fun, I am all in favour!

We all know that these calls for 'cultural understanding' really mean special pleading or (more likely) 'trying to pull a fast one'.
I remember a mate in the police telling me of a family of RoP-ers demandng that their house be completely re-carpeted because the insensitive kafir plod had failed to remove their boots before entering to arrest a murder suspect.

XX It's about having that cultural understanding when you're planning the firearms operation - do you understand the cultural aspects that might be misinterpreted as being aggression within a particular community?" XX

Such as.... rataspaghetiarians don't like getting pumped full of lead whilst eating pasta?

Maybe they shouls have thought of that before placing the lasange bomb on the Wapping line....

Ch Supt Babu, 49, who retires from the Metropolitan Police on Monday after 30 years' service, said "radical measures" were needed...

Ooooh here's an idea. Instead of retiring on a fat pension aged 49 why don't you stick around a while, and you know, fix things?

" If he didn't pass the selection process for the SCS...these days... he must have been pretty poor."

Looking at the competition, I think you're right!

" A battalion of infantry with fixed bayonets would have worked wonders during the riots, or the Manchester Yeomanry in their prime."

"He's only read about half of the hallowed principles"

Not so hallowed any more, it seems. Even 'Nightjack has given up on them as 'irrelevant to the modern age', or so he claimed on Twitter yesterday...

"...is there any evidence tha Dull Baby actually did any, you know, coppering?"

These days, it seems that counts as 'actual coppering'.

"The logical conclusion of his demands would be a requirement for ANY person reporting a crime to describe their "ethnicity" and that of their surroundings, so the appropriate response can be sent..."

I love the idea, but refute the concept that logic plays any part in his demands!

I imagine I'd have to bake you a cake with a file in it!

That would be awesome!

Just loved the picture of the Sweeny - and the caption. LMAO.