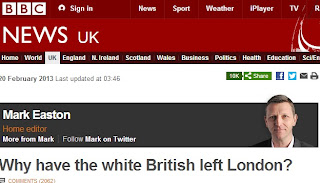 ...are you still puzzled about this today? If you ever were puzzled, of course  and asking a genuine question. I like others, have my doubts.

It seems the capital isn't such a welcoming place any more, except to work in, of course. And not just for those unable to handle themselves, either:


Mr Kyei-Baffour was on leave and had been out drinking with three friends, the Old Bailey heard. His group tried to chat up some women outside the Cape Bar opposite Wood Street police station, one of whom was Jasmine Nassif, 21, girlfriend of 22-year-old Ismail Francis.

Prosecutor Christopher Hehir said that as Francis made it clear he did not like the group talking to his girlfriend, five other men became involved and police intervened and moved people along.

The soldier and his friends went back to their BMW but as they drove off they passed Francis and Nassif getting into their Vauxhall Astra. Words and gestures were exchanged and Mr Kyei-Baffour and his friends got out of their car, the court heard.

The other men involved in the initial exchange stopped the two cabs they were riding in so they could join the attack.

Nassif took a baseball bat from the Astra boot and handed it to Francis who used it to attack Mr Kyei-Baffour and his friends, the court heard. Nassif was also seen hurling a bottle from the boot.

Mr Kyei-Baffour, who was stabbed early in the attack, was also hit with the baseball bat by Colin Mbagwu, 27, as he got back into his car.

The two minicabs from Addison Lee waited as the violence unfolded in Gresham Street. One of the drivers was told to leave and when he refused he was asked: “Do you want to get stabbed too?”


City of London Police Commander Wayne Chance said: “We will not tolerate this kind of violent behaviour.

“Anyone coming to the City of London with the intention of being violent should know that they will be dealt with so that those wishing to enjoy the vibrant nightlife in the City can do so without fear.”

Ummm, yes. I think, though, that's becoming a little too vibrant for some, if you know what I mean, and I think you do.

So it's no wonder people are moving out into the relatively safer suburbs.


A father had a piece of flesh bitten from his hand by a man who jumped the queue in a chip shop.

Shane, 25, who is too frightened to give his surname, spoke of his ordeal in an appeal for witnesses to help track down his attacker.

“We were waiting to be served and this bloke came in and pushed in front of my girlfriend,” he said. “She said, ‘Excuse me, you jumped the queue.’ I just thought that he would be a gentleman, like any normal person, and say, ‘Sorry, you go first’.

“But he got really aggressive really quickly. I asked him not to speak to her like that, but he pushed me over, sat on top of me and bit the top of my finger off and then a chunk out of the palm of my hand. It was unbelievably painful.”

The man then dragged Shane outside the Station Fish and Kebab Bar in South Street, Romford, and into the crowded street, where no one came to help him.

He said: “He was still on top of me and in the struggle my hand was in the road and a bus ran over it. He was some sort of animal.”

The 10-minute attack ended when the man fled, apparently on a bus, laughing and waving.


Police appealed for witnesses to the attack at 2.10am on Saturday, February 2 by a black man who was six feet tall.

Ah. I see. Well, when the courts catch up with him, I'm sure his peers will lay down some punishment from the jury box. Or not...

And by the way, where do you think Mark Easton lives?
Posted by JuliaM at 09:35

Until recently Romford was not like this. I noticed the change a few years ago ago when I came out of the station and saw three young blacks hanging about. A few weeks later I saw 2 special constables on permanent duty outside the station.

Having said that the people outside should have attacked the black thug or at least pulled him off. We should show more solidarity with each other: blacks thugs in particular always see how far they can go.
If they complain about racism it usually means they cannot get away with anything.

The real reason 'Whites' have left London is because they have no political representation. The Romanian ambassador is complaining about possible racist attacks on Romanians and Bulgarians while the news has a story about a Britsih woman decapitated by a Bulgarian in Tenrife.

The instinct of self-preservation mobilises any group threatened by critical change. Comparison with the 1930's Jewish situation in Europe would over-damatise the white Brit dilemma but the former exodus should not be disregard.

Most animals are driven to find a safe location for themselves and their progeny. Peacefully where possible but through conflict and by any means, if necessary. The required solutions to city life crises, arising from the soft policies of self-serving politicians, linger in the imagination.

Wayne Chance....crazy name but not a crazy guy, typical ACPO wankspeaker. As for the Corporation of London allowing CLUBS into the Square Mile which attract NIGGERS...because that is what these animals want to be...NIGGERS from a Baltimore Corner or a 'hood in LA. Absolutely mental. VIBRANT? Fuck it! Ethnic vibrancy in the urban areas or rural chav scum? Well...at least they're our pikey chavscum and not imported scum. I suppose the old bill can't ask them how they can afford their BM's and Merc and 4x4's with blacked out windows when they don't get up until 6pm to get a haircut before going out dealing drugs.....oh, sorry!

White flight - first identified some 40 years ago, maybe more by US academics (or social scientists) - no surprise to anyone.

It's an ever increasing trend not just amongst our 'vibrant' chums. But the evil poor also. Any perceived slight or attempt to stop them getting their way is met by a response of instant violence out of all proportion to the original 'incident'

Why? I think the fact there are little to no consequences any more has a lot to do with it. Even if caught this sociopath is unlikey to face any jail time for what will be downgraded probably to just 'assault'

As you frequently point out Julia , the PTB live nowhere near these people , they don't shop in the same place , visit the same pubs , have to send their children to the schools that breed them.

But as long as their 'progressive' initiatives are out there for all their peers to see. What does it matter if a few peasants get bashed or murdered

"An armed society is a polite sociaty " Robert A Heinlein

Hmm, let's see. Out of the 5 houses immediately next to mine, 4 have had vehicles stolen from their driveways. 2 houses have had break-ins. We've had 2 murders on the street in the last 3 years (although I don't count the 1 because it was spouse-on-spouse). There has been 1 genuine stranger dragged into the bushes rape. We've had people openly dealing drugs in the street. Last Thursday night we had a car racing up and down on 2 tyres and 2 rims. All of this is around 600m from the new Newham council building and about 200m from a school in what used to be a nice residential neighborhood.

The police seldom show up in anything approaching a reasonable time and when they do, they're generally worthless.

I'm only here because I can't afford to move - I've got equity in the house, but I'd be financially setting myself back around 3 years by selling up and moving.

"The required solutions to city life crises, arising from the soft policies of self-serving politicians, linger in the imagination."

I think it's too late. You can't put the djinn back in the bottle.

It does seem to be getting worse. Perhaps those experiments with rats & overcrowding were onto something?

"I'm only here because I can't afford to move.."

A lot of people are in that boat. I'm planning ahead.

The Perps wre all wogs.