The Courage Of Your Convictions..?

A teenager was last week excluded from a Meopham school after a teacher accused him of performing a Nazi salute in class. 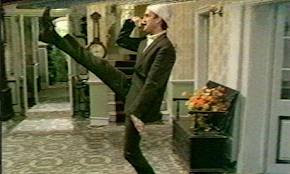 Fourteen-year-old Ben Hayward is said to have made the hand gesture while clicking his heels and saying ‘Heil Hitler’at Meopham School, in Wrotham Road.

But Ben, who denies using the phrase and clicking his heels, says he was unaware he was being ‘racist’ when he stretched out his left arm to imitate his teacher, who was using her hand to signal for the class to be quiet.


Following the incident in November last year, Ben was punished with a two-hour after school detention. However Ben and his parents refused to accept the punishment and demanded a meeting with the school in a bid to have the incident thoroughly investigated.


His father Scott Hayward told News Shopper: "We asked the school to talk to the teacher as we thought she may have misjudged the incident as racist.

"At most it could have been seen as undermining her authority...

Aha! Oh, you don't think that would have been enough?


...but definitely not racist.

"If investigated properly with witness statements from the other 20 or so children there, it would show the teacher was mistaken."

Hmmm, I think the police have better things to do, frankly.

But wait! There's been a development!


Although the detention was postponed, headteacher Matthew Munro contacted the Haywards in January to say Ben must serve the punishment but the school was prepared to no longer describe the incident as racist.

The 41-year-old added: "We refused as we said all along we wouldn't accept a change of accusation, especially after accusing our son of racism without further investigation and causing so much upset to all our family."

Stranger and stranger! What does the school have to say for itself?

"We had discussions with Mr and Mrs Hayward and we did agree we wouldn't categorise it as a racist incident but that it would be a serious incident and the punishment would stand."

Hang on, why aren't you categorising it as 'racist'? I thought the modern guidebook was quite clear on this?


"A racist incident is defined by perception of other people rather than the intention of the person who committed it and this is the point we tried to make.

"The fact remains a teacher took great exception and perceived the incident as racist.

Well, that's it then, under modern definition of the terms, the charge stands, no question.


"However, as I said this was a point we were willing to re-categorise and that is where we left it."

So ... having claimed it's up to the receiver to set the category, you are now backtracking? How come?

Could it be that you don't really want to push this too far?
Posted by JuliaM at 10:45

Yep, take it all the way, I say. Put the rank stupidity and underlying insidious nature of "racism" claims under the full glare of public ridicule and rejection. Show it up for the crock of contrived bullshit it really is.

Play the game and argue the toss by all means but the parents must be prepared for their son to take his punishment at some point though. He was, at the very least, being a little shit. He knows it, his parents know it.

"Undermining authority and disrupting the class" will cover it and a two hour detention will suffice.

Ah, the wonders of the "education" system; since when were twentieth century Germans a race?

Far quits one and all.

The teacher should be hauled over the coals for this one, I don't think a NAZI salute can be described as racist, as the Waffen SS was a multi-ethnic organisation with a substantial muslim contingent. I think the teacher should be named so we can send abuse to him, dear Sir you are a muppet.

Surely the only way that the kids actions could be described as racist would be if the teacher was German/Austrian? To insinuate anyone else was a Nazi(which is what the kid was doing obviously)would be rude and disrespectful obviously, and the kid deserves punishment for that alone, but how could calling a British teacher a Nazi be racist abuse?

My spidy senses are tingling about this one. Why do I get the feeling that if the teacher were of an ethnic background he or she might be more likely to throw the race card around?

Bunny, the fact that the Waffen SS had a very enthusiastic Muslim contingent is one of the dirty little secrets that the Islamic appeasers find very uncomfortable. It is quite plain when you look into the history that the Swastika and the Shahdaha belong together.

Neither do I and I suspect neither would the majority. Point is it doesn't matter what we think and The Law is perfectly clear so they have two choices.

Either take the complaint of "racism" all the way, fully investigate and decide how (not whether) to prosecute to the fullest extent of The Law OR redefine The Law so that idiotic situations like this never arise in the first frickin place. "Courage of convictions" is the phrase that absolutely nails it for me. You either follow and abide by The Law or you don't.

We're all sick to death of hypocrisy and double standards and if it means taking just one case of a schoolboy being a dick to the absolute limit to smash it then I say go for it.

A court ruled a while back that making Nazi salutes to a German was indeed 'racist' (although I don't remember what the exact charge was).

But other than that I don't see how the school could have felt it was racist-was Miss actually a Fraulein?

Strange isn't that the teacher's race/ethnicity/origin/religion is not being revealed?

Yes I know the law is framed such that the injured party's race isn't relevant but we know that is a load of crock. There 'must' have been a basis for why 'this' particular teacher felt the need to react the way they did... I'd like to know what it is?

We have ways of making you squawk.

XX when he stretched out his left arm XX

The salute should always be given with the RIGHT arm. Anything other than that is NOT a salute, and can not be punished as such.

The salute should always be given with the RIGHT arm.

I'm not sure that's correct. Any 11 year old will tell you that use your right index finger to make the Hitler moustache, leaving your left arm to make the salute - as demonstrated by Torquay's famous son Basil (pictured).

The thing is, these days such an incident will end up on the boy's record as an incident and will show up on any CRB checks for the rest of his life.

I can see why the parents are fighting this so hard. I would.

We were more knowledgeable little NAZIs than you obviously were, Mr. Pickworth! At my school, we used the left index finger to mimic the Hitlerian moustache, our right arms were extended in the 'Roman' salute.

what are you all going to do when it becomes apparant that many races do think they are superior to others.
And some of these are from very big countries. Who dont give a damn.
I expect you will cringe.

what are you all going to do when it becomes apparant that many races do think they are superior to others.
And some of these are from very big countries. Who dont give a damn.
I expect you will cringe. XX

Is tha' a threet big man!? Cus I am jiss aboot te knee ye one in the BALLS!

"Show it up for the crock of contrived bullshit it really is."

Hence why they always back down, and offer a compromise.

"My spidy senses are tingling about this one. "

"The thing is, these days such an incident will end up on the boy's record as an incident..."

I don't think even the CRB goes that deep! Does it?

Well I pwercieve that the teacher was racist when she stretched out her arm. I now await Plod to prosecute this racist incident