Should've Gone To (The US Equivalent Of) Specsavers... 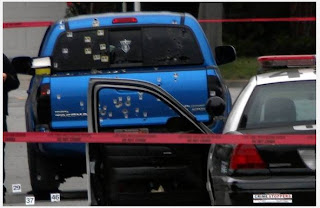 "Stop or we shoot randomly and erratically!"

The above is the result of the LAPD's manhunt for this man, Christopher Jordan Dorner, who has killed three people and gone on the run threatening to kill more, especially the LAPD: 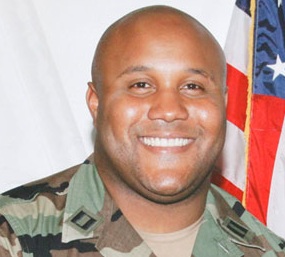 Inside the truck? Two Hispanic women. They didn't, one presumes, look anything at all like Dorner, but their truck did look a bit like his vehicle, and they had the misfortune to be delivering newspapers in it.


On Friday, the street was pockmarked with bullet holes in cars, trees, garage doors and roofs.

Residents said they wanted to know what happened. "How do you mistake two Hispanic women, one who is 71, for a large black male?" said Richard Goo, 62, who counted five bullet holes in the entryway to his house.

Still think we ought to arm all our cops, as Gadget wants?

Oh, and an interesting little wrinkle about this particular boastful killer. Something that won't be mentioned in the UK news at all, and is being discreetly erased out of the US media too. But you will hear it in blogs like Protein Wisdom and Patterico's Pontifications: he's an Obama-worshipping, left-wing-leaning, gun control loving whackjob as his full letter (carefully edited by the MSM for publication) shows:


No amount of IMINT, MASINT, and ELINT assist you in capturing me. I am off the grid. You better use your feet, tongue and every available DOD/ NON-DOD HUMINT agency, contractor to find me. I know your route to and from home, and your division. I know your significant others routine, your children’s best friends and recess. I know Your Sancha’s gym hours and routine. I assure you that the casualty rate will be high. Because of that, no one will remember your name. You will merely be a DR# and “that guy” who was KIA/EOW or long term IOD/light duty in the kit room. This is exactly why “station 500″ was created. Unfortunately, orphanages will be making a comeback in the 21st century.

If you had a well regulated AWB, this would not happen. The time is now to reinstitute a ban that will save lives. Why does any sportsman need a 30 round magazine for hunting? Why does anyone need a suppressor? Why does anyone need a AR15 rifle? This is the same small arms weapons system utilized in eradicating Al Qaeda, Taliban, and every enemy combatant since the Vietnam war. Don’t give me that crap that its not a select fire or full auto rifle like the DoD uses. That’s bullshit because troops who carry the M-4/M-16 weapon system for combat ops outside the wire rarely utilize the select fire function when in contact with enemy combatants. The use of select fire probably isn’t even 1% in combat. So in essence, the AR-15 semiautomatic rifle is the same as the M-4/M-16. These do not need to be purchased as easily as walking to your local Walmart or striking the enter key on your keyboard to “add to cart”.

And clearly, he's going to show everyone just what he means by going on a kill-spree! With thinking skills like those, it's unsurprising he's washed out of every job he's ever had, isn't it?

And amazingly enough, he has fans! Just like Raoul Moat. And not just across the water, either: 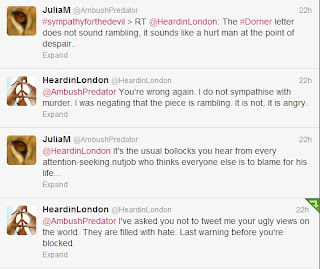 What does one say to that..?

Yes, indeed: it's the people who don't support murderous loons who are the H8ers.

Who said the left were vicious nutcases?

I expect you were blocked, Julia, because you dared to voice an opinion that the hating, nasty left doesn't like. Standard response from da sozializts: you say something that might give cause for a leftie to actually think and they stick their fingers in their ears.

You have to follow the party line, lady, or else there will not be more rules and laws and excuses for the murderous.

Been following this story for a few days and I have to say the 'man hunters' are positively revelling in their pursuit of this individual. It's hardly surprising there's been some collateral damage.

Clearly this man is a real danger but the response is way, way, over the top. And while our cops aren't routinely armed, I don't think it would be any different here given the same circumstances.


'And amazingly enough, he has fans! Just like Raoul Moat. And not just across the water, either. What does one say to that..?'

I hate to spoil this but you must patiently await Colonel Trautman's "There is no hope of escaping alive" and Dorner's response "I'm tired of being misunderstood. In the Police I was a hero but back on the street I can't even be trusted to park cars."

After blowing up an entire Town, Dorner then surrenders to his former Boss. Splendid drama.

"...the 'man hunters' are positively revelling in their pursuit of this individual."

"Ideas are more powerful than guns. We would not let our enemies have guns, why should we let them have ideas."

"Death solves all problems - no man, no problem."

Let me see. How about "Go fu** yourself"? That would pretty much be my response....

Heh! Quite. I think I'm well rid of someone who sees Twitter merely as his own private broadcast channel with no 'backchat' allowed...

"Who said the left were vicious nutcases?"

Anyone with any sense!

"And while our cops aren't routinely armed, I don't think it would be any different here given the same circumstances."

Oh, I don't know. Yes, there have been accidents, but not on the scale of this! And I gather it's not unusual.

"...but you must patiently await Colonel Trautman's "There is no hope of escaping alive"..."

Currently watching Fox News (waiting for the State of the Union address) and they're updating the Chris Dorner story live.

It appears Dorner had broken into a home and taken a couple hostage literally a few yards from the search command centre. Reports suggesting he had been hold up here for a few days until one of his captives escaped. A short time later Dorner ran down the road and hijacked or stole a vehicle (the media aren't sure which or whether he has a hostage currently). He apparently drove to a mountain cabin in the area where he was confronted by two deputies. Gun fire was exchanged and both deputies were shot - one critically injured and the other killed. The cabin is currently surrounded and the media says tear-gas has been fired but no gun fire has been returned.

Meanwhile the media's helicopters are filming a road block some miles away and complaining bitterly that the police have imposed a no-fly zone over the cabin. The cops say this is to prevent Dorner seeing the cops movements on live TV, they've also scrambled police radio transmissions. However, the media say they've heard from the cabin's owner that there is no TV, internet, phone or mobile services at that location.

As I type; reports coming in that the cabin is fully ablaze.

"As I type; reports coming in that the cabin is fully ablaze.

A shot rings out, cabin set alblaze, a charred body found in the wreckage by the authorities....