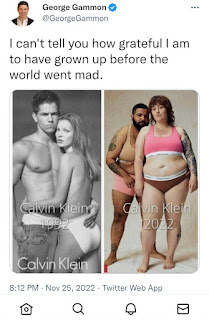 Both whatever-genders-they-are-today are overweight, with the 'man' wearing a bra. Why? What stupid point are they attempting to push?

In just 30 years we've lost hundreds of years of societal developments and improvements, to arrive at this pathetic corruption & fizzling out of western civilisation.

But if so-called western civilisation is irredeemable, it's very different in the rest of the world (87% of the 8 billion): BRICS, SCO, etc. are preparing for major expansions of their areas of influence (while we destroy our industries and freeze to death).

Reply to Ed P, it's all part of the plan Ed. Heaven knows what the plan is but we are right in the middle of it, stick up a gum tree without a paddle.

Have you seen the winner of the Miss New Hampshire, Greater Derry contest, Brian Nguyen?
Obviously the judges focussed on the Greater requirement.
Just search.

"Why? What stupid point are they attempting to push?"

I don't think there is a point, beyond sticking a thumb in the eye of all normal people and hoping the generated outrage gets them noticed. Because they cleave to 'there's no such thing as bad publicity'.

"Have you seen the winner of the Miss New Hampshire, Greater Derry contest, Brian Nguyen?"