Stand By For British 'Justice'...

Let's look at these two fine specimens of 'manhood': 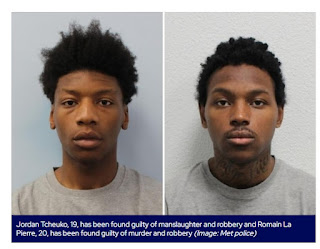 *sighs* What sentence can they expect for this?

On July 31, the trio and some associates called a mini-cab at Fieldend Road in Streatham. When the taxi arrived, the group held a knife to the driver’s throat and robbed his phone and car. They then travelled in convoy with two mopeds on a “hunt for rivals” – which led to a crime spree in Croydon.

The first home was no longer lived in by the person they were searching for and a woman woke up to find a masked man in her bedroom. At the second address the group could not get in and so moved on.

At the third address in Bracken Avenue, the group kicked down the door to Camron’s home and chased him to his mother’s bedroom. They then murdered him with knives.

Will it be appropriate? What do you think, Reader?

Don't forget Julia, these are the real victims here. Sentancing will probably reflect that

In a different Universe, they would right now be kicking a ball in Qatar ...

Wasn't Britain a better place with no darkies and the death penalty, even if the fuurcking Krauts were misbehaving at the time?

PS. I was looking for a brown pair of shoes recently. They should have their hides tanned.

The cure for cancer feels much further away today.

Fill your country with nappy-headed niggers, don't be surprised to get nappy-headed nigger behaviour. Hopefullly the judge will take account of the crime spree before the killing, which takes away from any defence of "spur of the moment"

One of them happens to be my son. He came to me after. I had no option but to go to the police. I feel horrible. But

Thats my son mate. My son gave 40 years to the NHS. My dad gave 30 years to the met. Me I gave 25 years of my life to the NHS. Listen stop being a virgin punk. That still lives with mummy. Racist ppl like you. Have never left the UK Not even for a holiday. And you have the IQ of an ant. Kindest regards lol embecile lol

I used to care (living/working in London) but I re-emigrated back to Britain.

Now? I cheerfully watch as they kill each other (amazing that wherever you go, Africa, America, Europe or cities that used to be British, blacks kill blacks at 1000x the rate of even the invented/false-flag minor racist events we crackers are supposed to commit). The truth is that the 'victim' would have probably gladly killed them had the roles been reversed. There are no good guys in this story.

I particularly look forward to the (Oh so predictable) coming turf-wars, street battles and Albanian vs. black massacres (coming to a town/city near you soon).

Note to self: Buy more popcorn.

Anonymous
Fuck you you brain dead cunt, dont tell me of the wonders of your family tree when the only thing we hear about them is when they wind up on murder charges for wiping out some other twat after going on a crime spree. Firstly, Im not your mate, secondly Ive probably seen a great deal more of the world than all of your useless shower put together ( China, most of Europe, Nigeria, USA and Canada) so you can fuck off with your two weeks in Benidorm. You want me to be impressed with your shit? Control the murderous scum that fill the newspapers, 10 % of the population, 60% of the crime. Im a racist? so fucking what, being against arseholes like thw two in the picture should be a badge of honour. Oh, learn to spell, its imbecile, and if you want to see one, look in a mirror

"Don't forget Julia, these are the real victims here."

"In a different Universe, they would right now be kicking a ball in Qatar ..."

Is this why we struggle to win World Cups? 😏

"One of them happens to be my son."

If that's true, you have my deepest sympathy, and may I recommed Durex?

What the hell are you babbling about? Neither of these little vermin has given 40 years to anything... 🙄

"The truth is that the 'victim' would have probably gladly killed them had the roles been reversed. There are no good guys in this story."

Oh, ain't that the truth!