A Day At Kew

Decided to take a day trip to Kew yesterday, to see the autumn leaf display and the new Xstrata Treetop walkway.

It was truly a ‘worst and best of the UK’ day out. First, a horrendous journey by Tube, taking over two and a half hours to make (well over the expected time). This was caused by overrunning engineering works from the weekend (which must have made rush hour hell), then signal problems at Aldgate East and congestion at Earl’s Court, then the cancellation of our Richmond train at Parsons Green, followed by the cancellation of the one behind it too, which we’d been assured as we were turfed off would be going all the way through and was ‘only a minute behind this one’.

And to add insult to injury, a primary school trip joined at Barking, raising the noise in the carriage to near intolerable levels (even the teachers and classroom assistants had to bellow directly into each others ears to be heard, and any announcements from the driver were totally lost in the din), despite the feeble attempts at telling them to ‘Shhh!’ which were simply ignored – it was a relief when they left at Mile End and you could hear yourself think once more. I looked up the school’s Ofstead report, and found to my amusement it was marked as grade 1 and it claimed ‘Behaviour is outstanding and this has an important influence on the quality of learning. Pupils are courteous, eager to help others and respond very well to the school's golden rules.’ Perhaps the inspectors should accompany the little darlings on their next trip out…

But once we finally got there, I was reminded again why Kew is one of my favourite attractions in the UK – a real oasis of calm, no yobs at all (do they not bother to come due to the price or subject matter, or are they there as they are everywhere, but you simply don’t notice due to the sheer size of it?), just beautiful grounds and glasshouses, well maintained and well run, and enjoyed by tourists, well-disciplined and run school trips and respectful visitors. 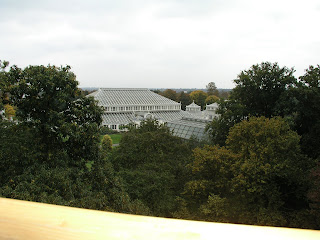 The Xstrata walkway was well worth the trip, though the fact that it had been left to go trendily rusty a la ‘Angel of the North’ might make some agoraphobics pause, as would the imperceptible tremors that run through the walkway when there are a number of people on it. But then, if you are agoraphobic, you aren’t likely to be at Kew in the first place!

Email ThisBlogThis!Share to TwitterShare to FacebookShare to Pinterest
Labels: London

Pre-rusted steel - 'Cor-Ten' - lovely stuff. Should be particularly nice on the tree-level walkway now the leaves are turning brown.

It certainly blends nicely with the autumn colours, but I can't help feeling some shiny glass and steel would have looked more impressive at other times, and helped people get more of a sense of how high up they are.

If you are short, like me, it's hard to look down as the rail is so high (for safey, I presume) - glass panels would have helped with this.

As a commuter (on c2c since you didn't ask) I'm quite grateful that almost to a man/woman everyone is generally silent whilst reading their books, sleeping, watching movies on the laptop etc. Makes the trip so much more pleasant.

Anytime outside of the rush hour though and it's a bit of a lottery as to what conditions one has to endure from the rest of the travelling public.

Fancy! I'm a commuter on c2c too - going the other way though, against the rush hour.

I do like their 'quiet carriage' concept (recently introduced). Unfortunately, it only applies to electronic gadgets - people, it seems, can be as loud as they wish. Esecially when the schoolkids get on...

From the way you were trotting out various District line stations I realised you had to at least know which line I was talking about - even if you didn't use it. :)

As for the 'quiet carriage' concept... nice idea but I always though rather pointless on that line. They work better in intercity routes IMHO.

" . . we’d been assured as we were turfed off would be going all the way through and was ‘only a minute behind this one’ . . ".

"...it's also been part of my experience on every airline and airport worldwide that I've had the misfortune to use."

I suppose it's their way of ensuring customers don't make a fuss.

Or perhaps, to give her the benefit of the doubt, the train was going all the way through, but was then summarily cancelled like the original.