The Unspeakable In Pursuit Of...

The 'Daily Fail' falls even further down the journalistic plughole with their report yesterday of sickening acts of cruelty to foxes in urban Liverpool.

And here's one of the photos they used to illustrate it: 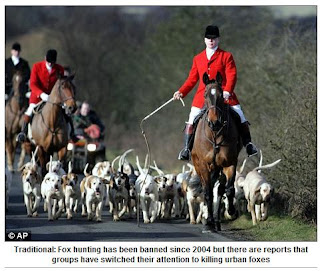 Check out the caption:

Fox hunting has been banned since 2004 but there are reports that groups have switched their attention to killing urban foxes.

Because it's perfectly reasonable to suggest that Sir Farquar Bufton-Tufton of the Belvoir Hunt has decided to swap his 18 hand thoroughbred and pinks for a battered Ford Escort and Kappa shellsuit and trainers, filled up his stirrup cup with WKD or vodka and Red Bull and left his fifteenth-generation hound couples at home in favour of a cross-bred pitbull mutt, in order to send the 'Tally Ho' ringing across the darkened streets of Merseyside.

There is nothing cruel about a traditional fox hunt however it is now illegal and to be honest a more humane and efficient way of dealing with foxes is a gun. The laws surrounding cruelty to animals were more than sufficient to deal with fox hunting but as ever to justify its own existence and in the face of public pressure the government has passed unworkable, unnecessary and uninformed law in respect of hunting foxes with hounds.
Luckily, people who have been involved with fox hunting have been intelligent enough to stand up for themselves. They have found the loopholes in these new laws, been prepared to take new penalties as a cost of pursuing something that is right and made a sustained, logical and pragmatic argument to change the past wrong decisions for the better.
When 'city folk' start to experience the consequences of a growing, problematic and destructive fox issue on their property and person the 'cutie cub' brigade will have no option than eating their own words. Hunt’s men and women alike should be breeding foxes to release into their closest towns and cities. At the same time buy legally owned firearms specifically for dealing with the threat to their property and livelihood while we have to put up with an idiotically conceived hunting ban.

I wonder what a traditional hunt with a disciplined pack of hounds would make of a bunch of chavs and a couple of illegal pit bulls. My money is on the Hunt's men, women, horses and hounds. Tally Ho ;O)

Police horses are some of the most beautiful animals that have commanded my respect in terms of the rider and the beast but even they would have problems coming toe to toe with a well organised hunt.

I have a couple of problems with this article... in fact I think it's an outright lie, and the 'fox hunt' never happened.

1) There is no picture and it's unlike the Daily Wail to miss the opportunity of depicting a dead fox, or at least one sad looking animal friend.

2) How is the pack of dogs going to catch an urban fox on his home patch which is in a built up area full of fences and other obstacles that need knowledge to navigate in a hurry? The dogs stand no chance here at all, besides, foxes climb onto sheds and other high places quite easily, whereas dogs can't.

So... I think this story comes straight out of the feverish imagination of the same idiotic activist hacks who just held the national wailfest about the sheep being 'executed' by nasty, meat-eating children.

You are talking about a class of moronic Labour progeny that still indulge their macho fantasies with dog and cock fighting. The latter now tolerated as part of not upsetting our multi-cultural immigrants.

Mike is right - we should nuke the countryside and rid it of slugs, rats, foxes, madmen in red coats and whatever else Noah let off the Ark.

Fox hunting was never about ridding the countryside of foxes but part of its management for the provision of agricultural produce. Like cutting hedges, planting trees and many forms of pest control. If you want to protect a natural environment untouched by human existence try a national park or the jungle as a focus for your attention not farms. While our society is not nomadic our settled communities rely on the management of the environment and its wildlife. Fox hunting has evolved as an efficient and humane part of the way humans can work with nature. It is no more inhumane or unnatural than keeping bees near crops of strawberries.

The pomp and circumstance associated with a traditional fox hunt is simply a celebration of how people how are involved demonstrate their care for animals and the environment and a good excuse for a snort of something delightfully warming, Tally Ho

If I live in a savannah and tended crops that were being decimated by omnivores a trained tiger or lion would seem quite natural to keep the gazelle or whatever in check. As cats have been used to keep mice and rats under control.

Chavs with uncontrollable pit bulls are a danger to themselves and their fellow mankind. They also serve no productive purpose. The pit bulls should be exterminated and the Chavs re-educated

Hen, your right btw. The fox, if it existed would have escaped stupid Chavs with even more stupid cumbersome lumps of dog meat

"...but as ever to justify its own existence and in the face of public pressure the government has passed unworkable, unnecessary and uninformed law in respect of hunting foxes with hounds."

As ever, needing to be seen to be 'doing something' and also needing to appease the loons that vote for them has got them in hot water...

"...in fact I think it's an outright lie, and the 'fox hunt' never happened."

Could well be, given it's the 'Daily Fail', but the sort of underclass scum that spend their time dogfighting or fighting each other could well have decided to branch out.

They need to be shot out of hand like the vermin they are.

"Could well be, given it's the 'Daily Fail', but the sort of underclass scum that spend their time dogfighting or fighting each other could well have decided to branch out."

Seriously, I cannot see it happening at all -- I have a huge dog chorus in my area because there are foxes(which all the neighbors dogs would *LOVE* to catch...) but it never happens, even if the fox is already completely mangy and disabled... the dogs are totally useless here, at best they fight each other (and their keepers) in the park. The only foxes that die here are killed by cars, trap & air rifle or disease!

Nops the entire article looks to me like it is another PETA-style lie... have a look at some of the claims these nutcases come out with -- a lot of them just don't stand up to scrutiny because reality just does not work like it.

But because so many people no longer have an idea how foxes (and dogs) act, or how slaughter actually works, they are easily lied to by adding some gory embellishments that sound so horrible that no-one dare question the feasibility or the mechanism by which this is all claimed to be possible. The moment people see real life blood, common sense tends to get suspended...!

Now throw a few dotty middle-aged hippy hens into the mix and you have the makings for yet another bumper donation year for the animal rights charity business -- now with added chavs for 10% extra income!