Kipling Was Right About The Female Of The Species...

As it turns midnight, I’m hiding in my garden behind a tall camellia bush, clutching a weapon. My targets: four villains hiding on the other side of the fence.

They’ve broken into my territory three times today. I’ve had enough — and this time I’m ready for them. As I listen to the sinister rustling of leaves coming from the darkness, my finger’s on the trigger and my heart’s in my mouth.

Well, it seems you've got more balls than Ben Douglas...

Sadly, my targets are too cunning to get caught. They keep me waiting for so long that I eventually give up in despair and go back into my house. I’ve been outfoxed again.

And before anyone gets the wrong idea, she isn't armed in the conventional sense:

In truth, my weapon is an old Super Soaker Tornado Strike water pistol. And the villains? A vixen and her three cubs.

Is she worried about them pooping in her flowerbeds? Have rabbits in a hutch that she thinks might become prey, or chickens (all the rage woitjh the chattering classes, it seems)? No, she's concered about her dog.
Wait. What?

They may look cute in photographs but, as every British farmer knows, foxes are canny predators that show no mercy.

In this case, the prey they’re after is my 13-year-old Cavalier King Charles spaniel George, whom the vixen has been terrorising for months.

Oh, well, cheer up. It's not like other dogs, hunting dogs even, don't have anything to be ashamed of on occasion: 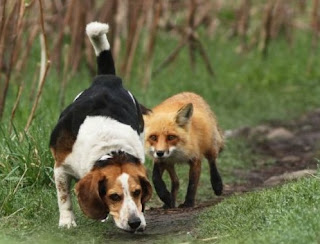 In the past four months, our local vixen has made three totally unprovoked attacks on George, a coward of a dog who’s terrified by the sight of a distant Chihuahua.

Gosh, I can't think why a vixen with cubs might be a bit less than keen on the presence of a dog in her territory, can you?
Strangely, the fox cubs that regularly visit our garden are unconcerned by our cats, even the ones that outweigh them, and so is their mother.

The local council has been no help. Though they’re happy to decree what kind of garden gate I may or may not erect outside my home (I live in a conservation area), when it comes to foxes it turns out their pest control department has no policy.

Instead, they directed me to The Fox Project, a charity which rehabilitates foxes back into the wild.

But rather than advising people how to keep mangy foxes out of their gardens, the charity’s website suggests ways of treating their mange with homeopathic remedies, disguised in honey sandwiches.

Not quite the advice I was looking for.

Oh dear. Though hardly surprising. If I wanted to keep the neighbours' children out of my garden, I really wouldn't expect the NSPCC to be much use at suggesting non-lethal methods, either...
Posted by JuliaM at 11:35

Those bastards at the Council. Surely protecting dogs from foxes is a vital frontline service?

Is a fox really going to be terrified by a water pistol?

More advice she won't be looking for:

"Gosh, I can't think why a vixen with cubs might be a bit less than keen on the presence of a dog in her territory, can you?"]

So, you want the women to lock her dog up and donate her garden to the foxes?

"Strangely, the fox cubs that regularly visit our garden are unconcerned by our cats, even the ones that outweigh them, and so is their mother."

Well, that may change as your cats get more elderly and start to qualify as toy prey for the cubs, or perhaps amble a little too close to the den.

A shredded pet corpse usually cures people of any liberal fox hugging notions they had...

Just contact your local fox-hunt and ask if their terrier men can, for a suitable fee, dispose of the vixen and cubs. It'll be all over in an hour, and the only disturbance will be a few quiet low-calibre shots from a pistol aimed at the head of each fox. Quick, easy and effective, and remarkably cheap, too.

Has she thought about having a quiet word with young Stabby off the local estate with his pitbull fang? The mention of a "Teenth bag of weed" in it for him should sort out her little problem.

Dispose of the carcass(es) in local woodland .. after first retrieving your Quarrel(s)..

"Is a fox really going to be terrified by a water pistol?"

Most will run if you raise your voice.

Ah, you were having problems with Google earlier, too?

"Well, that may change as your cats get more elderly and start to qualify as toy prey for the cubs.."

Doubt it. The cat that regularly sees them off is 14. It's not like she might have been over-egging the pudding a little for the sake of a column in the 'Mail', surely? ;)

I don't think she's the sort to have contacts in the local hunt. Or amongst Budvar's suggested hoodie culture either...

XX Instead, they directed me to The Fox Project, a charity which rehabilitates foxes back into the wild.XX

They are wanting you to ACCUSE them, you stupid bitch! NOT consult them.