Let's Put On The Show Right Here In Paris!

The plight of families facing eviction from Dale Farm traveller site will be raised by three actresses on a Paris theatre stage.

Yes, I've heard about those 'special shows' you can see in Paris! I bet there'll be a packed house for... 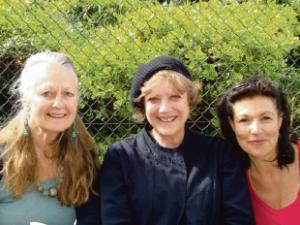 When shall we three meet again?

Kika said they hoped to give a repeat performance of the show in south Essex, in support of the travellers.

She said: “We are doing a performance on the persecution faced by Roma people in France, in Europe, as well as at Dale Farm.

“We will talk about Dale Farm, video footage of evictions will be played as well as newspaper reports read out.

“I will read out Corin’s speech, when he had a heart attack in Basildon.”

Well, I bet that'll be a real show-stopper...

"At Dale Farm, the people have not been allowed to settle after they bought their own land."

Well, no, sweetie, owning the land is only part of the necessary legal hurdles; it's planning permission that is needed, and that's what they haven't got.
And aren't going to get.
Posted by JuliaM at 11:40

I own a piece of land, but I'm not allowed to build a house on it.

If these muppets are so concerned about pikeys and tinkers, let 'em live in their back yard.

PS They are not 'Roma'. They are scuffy, smelly diddy-coy thieves.

Fucking hell! Why do actresses and actors feel the need to impose their pathetic luvvy views on everyone? Their professional lives are make believe so seemingly they can't differentiate between what is real and what isn't?

I knew her brother .. Piper

"Fucking hell! Why do actresses and actors feel the need to impose their pathetic luvvy views on everyone" ?

Cos if they didn't, people would forget who they ever imagined themselves to be ..

They aren't Roma; they are what used to known as Irish Tinkers in all probability.

Ah the leftie luvvies lurch into the spotlight again, obviously at a bit of a loose end being "between" gigs again, er.. perminently.

All these people should take their lead from one Bradd Pitt:

"Politics? What the fuck do I know about politics? I'm an actor. I put on makeup and pretend to be somebody else..."

Progressive pets do not have to obey tbe Law. Laws are weapons to be used by progressives against their ideological enemies.

BTW, I imagine these fools don't live within 10 miles of a pikey colony.

I knew her cousin, Artois.

Surely one of the luvvies owns enough land to house one of these Constantly Uprooted Noble Travelling Stock?

It'd make a fine and heartwarming tale for the Guardian to print.

But, which one plays the caravan and which one takes the part of the pile of old car tyres?

I think we should be told.

The one on the left plays the mangy horse.

Perhaps they should do the show in Dale Farm ?

The three will also sing Djelem Djelem, the Roma national anthem.
(boggle)
As Chalcedon said they are not Roma but (Irish) Travellers who were known as tinkers because their main trade was the repair of tin pots and pans.

"Why do actresses and actors feel the need to impose their pathetic luvvy views on everyone? Their professional lives are make believe so seemingly they can't differentiate between what is real and what isn't?"

Plus they're well off and can afford to adopt 'trendy' causes, knowing full well, as Rob points out, they won't have to live in the mess they create...

"They aren't Roma; they are what used to known as Irish Tinkers in all probability."