Fearing Grant may have a weapon, Mehserle said he decided to shock Grant with his Taser but pulled his .40-caliber handgun instead.

Clearly, the thing to do to protest his aquittal on a murder charge is to have a demonstration smash up everything in sight and loot some nifty footwear: 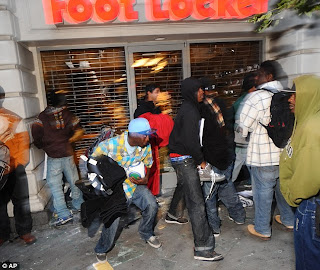 Still, we can count on the Guardian CiF posters to tell us how to avoid this sort of situation, can't we?

Lola's solution? They should be unarmed.

Perhaps without guns, police would have to be more creative and rigorous when it comes to getting their jobs done. At least this way, we'd have less cases of police firing now and apologising later.

I think we're safely into /doublefacepalm territory here. I take it there's no /triplefacepalm..?
Posted by JuliaM at 11:20

Email ThisBlogThis!Share to TwitterShare to FacebookShare to Pinterest
Labels: CiF, What the hell is wrong with people? riots

"I think we're safely into /doublefacepalm territory here. I take it there's no /triplefacepalm..? "

Police will occasionally kill prisoners, deliberately or not, with guns or without them.

Professional criminals will most definitely 'benefit' from knowing that the first responders to a crime will be unarmed.

Let the Police have guns, big ones, provided that they are proven responsible and are well trained. Let the people have them as well, under the same criteria. Punishment for misuse should be severe.

I'm sure that guardianistas everywhere would just love it if the only people with guns were criminals. This Lola is clearly an idiot and yes /triplefacepalm territory is in sight.

policeman was convicted of involuntary manslaughter and his career as an officer is over.

the victim was on heavy duty drugs and some evidence that he was part of a gang of youths spooted an hour before brandishing a gun or guns..

not a pretty saga.

"Let the Police have guns, big ones, provided that they are proven responsible and are well trained. "

And therein lies the rub. It seems that lately, too many are not.

"Let the people have them as well, under the same criteria."

"not a pretty saga."

Judging from the overwhelming comments at that article now the sensible, non-automatic cop haters have woken up, you'd have to get in line!

That was because our thoughtful and creative police SHOT HIM IN THE FUCKING HEAD. The concourse in Stockwell tube station was red.

And it was a stupid, tragic mistake. Give people guns and grant the fact that there are circumstances under which they may - and should - use them, and admit the necessary corollary that there will be occasions when they may not - and should not - use them but do anyway. And then the innocent die.

Did the cop mean to kill him? I think quite clearly not. And if that is the case, then as my reading of US law goes (IANAL) that negates the mens rea qualification that distinguishes murder as a homicide from its sibling variants. Even if the cop meant to kill the victim, then certainly on its face the idea of premeditation or malice aforethought is wholly absent, so that rules out First Degree Murder.

Having said that, if in the heat of the moment a cop can pull what he thinks is a taser but turns out to be a semi-automatic pistol which he then uses to kill someone, a very long and deep series of questions needs to be asked, starting with: why the hell was this hot-headed, fumble-fingered moron entrusted with a law enforcement position?