...because yesterday, Salma Yaqoob (yes, that Salma Yaqoob) was given a column in 'CiF' to whinge about the awful, awful David Cameron speech aboult the collapse of multi-culti theory that has had the progressives frothing for the past few days.

She weeps and wails about a visit he made to a (carefully-selected) Muslim family in Sparkbrook, and opines that he appeared to have seen the light:

He praised the ward, a deprived, multicultural inner-city area, for its community cohesion and vibrant grassroots community infrastructure. He called for "a concerted attack on racism and soft bigotry". He described how "we cannot bully people into feeling British".

And yet now, according to Salma at least, he appears to have allied himself with the EDL and BNP and any other boogeyman Salma can think of.

What could have happened?

After Cameron's recent pronouncements on multiculturalism, I now ask myself: did he mean a single word if it? Instead of a supporting anti-racism, he gave a speech that was wholeheartedly endorsed by the leader of the BNP and those who took part in the EDL marches on the same day.

To which I replied:

Well, Salma, never mind. Just think of it as a Western version of taqiyya... 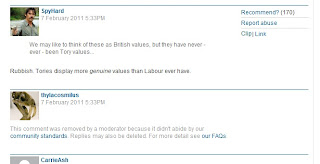 What did you say that was so evil?

It's in the blog:

"To which I replied: Well, Salma, never mind. Just think of it as a Western version of taqiyya..."

Strangely enough the EDL leader did not think that much of Cameron's speech either.

Heh taqqiya, I did wonder what it could have been that you said. But that was class and the don't like you pointing out that little Islamic foible even in the context you used.

A moslem lad tried a bit of taqiyya in my local Rileys snooker hall a while back.

He complained bitterly that he had ordered a beefburger but that his religion had been insulted by him being served a hamburger by mistake.

After profuse apologies by the staff they asked what they might do by way of compensation; he demanded two pints of lager, they told him to sling his hook.

Nice one. I did wonder what you'd said that had upset them.

On the subject of the Graun, has anyone seen the latest quality merchandise from the Daily Mash?

I want me one of them there Graun T-shirts. And the Billy Bragg and Daily Fail ones too.

I think you get the same response if you mention taqiyya at Harry's Place.

They really are a sensitive lot, arent't they, these lefties/Mohammedans?

Oh dear Julia... You have been judged, and correctly so, of not conforming to "Community Standards."

I am shocked, outraged and horrified, etc, as you would rightly expect.

It's important to keep posting on CiF - even if it gets deleted.

It narks the Usual Suspects & Useful Idiots no-end and (yours being a prime example) cheers the rest of us for as long as it remains uncensored.

Keep up the good work.

But back to the Respect (what a joke that title is with reference to your second link) bint's rant...

No problem bullying them OUT of feeling British though eh?

"Strangely enough the EDL leader did not think that much of Cameron's speech either."

"...he demanded two pints of lager, they told him to sling his hook."

"I want me one of them there Graun T-shirts. "

"No problem bullying them OUT of feeling British though eh?"

"He complained bitterly that he had ordered a beefburger but that his religion had been insulted by him being served a hamburger by mistake."

It's called a hamburger after the city that the snack was originated in, it contains beef.

The Bar staff are dumb for going for it in the first place.

They probably thought the weird word was something offensive because they didn't even bother looking it up.

Salma Yaqoob. what a bitch