…not when we desperately need to suck up to the ones who will eventually replace you all:

Dagenham Central Mosque is set to be unveiled in Green Lane by the autumn despite 1,300 objections from residents.

And (not mentioned in the online edition, but in the hardcopy) objections from the planning officers too...

People fear a mosque will put the shops out of business and increase traffic, while others feel a Muslim place of worship is not needed as there are others within a mile radius.

Despite the opposition, councillors on January 17 gave the group permission to turn the shops into a mosque and community centre, including a Safer Neighbourhood Team base.

The ‘Barking & Dagenham Post’ will print a letter from a resident disgusted with the decision, but it won’t bother to spellcheck it: 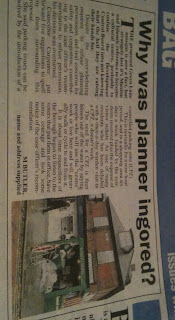 Barking adequately sums up the situation.

In homage to the well known 4 wheeled product of the Ford Motor Company, they could call the mosque the "Dagenham Dustbin"

What was it last May again?

"You don't wanna vote for the BNP, they're Nahtzees ain't they!!".

Oh that's in case certain religious types go round there to stone them, so the paper hides the address. ;-)

We need the equivalent of the Austrian 'Freedom Party' in the UK ASAP.

They really believe that Vienna will fall this time round.

Not just happening in Barking :

I tried, but Blogger wasn't having any. Must be something to do with the width.

Yeah, that was almost as funny. I can believe it was idiocy rather than malice, though. The B&D rag is a pretty shoddy, amateur affair by the standards even of local newspapers...

"Ah, that'll be so that the council can "legitimately" fund the running of the mosque."

I wouldn't be one bit surprised. I haven't seen a service cut yet that impacted on this particular section of the community.

"Not just happening in Barking.."