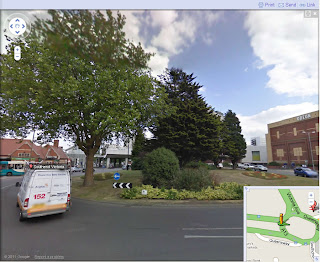 Fuming motorists say traffic levels in Victoria Avenue have got worse since the junction was revamped and traffic lights installed.

And a loud chorus of ‘We told you so!’ reverberates through the land…
The council’s response? Flat out denial:

Council bosses reject claims traffic has got worse compared to the previous layout...

And the ‘Echo’ readership piles on to say ‘Oh, yes it has!’:

She said: “The traffic was right back to Cuckoo Corner.

“Normally it would take 20 minutes, but this time it must have been 35 minutes.”

It’s indisputably true that this new road layout has led to longer queues – everyone’s noticed it. It’s noticeably heavier even in non-peak times. The rush hour is predictably far worse.

But according to the hapless councillor who stepped into Anna Wait’s shoes, it’s just a factor of the holidays:

Mark Flewitt, the Tory councillor for transport, said the lights are working properly, but the council would look at the results to see if there are any issues.

He said: “There are no glitches. The lights are being constantly monitored even during holiday times.

“We’ve just had some very heavy capacity over Easter and the Royal Wedding bank holidays.”

But the traffic was starting to build up from the moment this hideous concrete atrocity opened, Mark…

“We will make changes to it if appropriate.

“With the old roundabout there were queues at capacity time.”

Yes, there were indeed queues at capacity time. Not this long, and not as frequent.
And that’s without addressing the problem of the ‘shared environment’:

Alice in Her Own Land :P, Southend says...

I had a chat with the "Project Manager" for the Vic Circus carry-on last night and asked him if the bus-stops will ever be used which are by the station. His reply was that they are going to be tried out today between 10.30am -12-30pm. As of 11th May, they will be in use full time. I asked why they haven't been in use and he said that now that people have got used to walking in the "shared space" they were worried if people would be knocked down by a bus. I asked why they hadn't been used all along so people would have got used to the idea of the buses running there, and he couldn't answer me. I saw a couple of buses parked there, (Arriva and Stephenson's) so whether this other road for buses will be used, remains to be seen!!

It has the hallmarks of an accident waiting to happen. All that marks out this ‘shared area’ is a line of concrete balls (how appropriate!).
And the council seem to have been caught unprepared for the need to advise users of this brand-new concept:

Daily I witness the chaos resulting from motorists turning right out of Victoria Avenue into Queensway (to travel west towards the London Road/A13) whereupon they encounter a red light at the pedestrian crossing. In theory they should just proceed as the red light is meant for the traffic coming across from Queensway East but it is hardly surprising that folks hesitate to go through a red light. Waiting pedestrians are then unsure as to whether they should cross and the whole scenario is literally an accident waiting to happen. It says it all that there is a laminated A4 sheet of paper advising pedestrians that they should only cross when they see the 'green man' - in other words a tacit admission that this particular part of the 'improvements' is a total disaster and they are sheltering behind a hastily produced piece of paper attached to a traffic light pole. Bloody clueless!

Here’s one of the signs they put up yesterday: 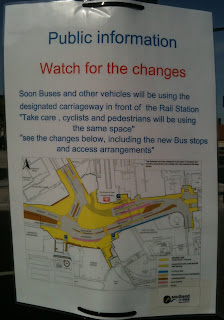 Marvel at the quality!
I mean, they must have realised that they’d need signs at some point, to warn the poor pedestrians that that nice pavement they thought they were walking on, safe from traffic, is actually a road.

So couldn’t they have commissioned some professional ones, rather than give the council work experience boy a crack at MS Word and the key to the laminating machine?
Posted by JuliaM at 11:05

They put one of those 'shared areas' on a busy crossroads in my town, replacing a pair of mini roundabouts, and pelican crossings. No-one knew which direction of traffic had priority, pedestrians didn't know when and where they could cross, it was a nightmare. Eventually, after much local opposition and several people getting knocked down by cars, they deigned to replace it with traffic lights. A total waste of thousands of pounds.

But, hey, it kept a few council employees busy for a year or two, so mission accomplished!!!

Putting lights onto roundabouts is always counter productive. The whole point of a roundabout is to keep traffic moving - the very opposite of traffic lights. if there is a flow problem, a magic roundabout solution would be better than traffic lights.

EXACTLY! Yet time and time again Councils put in roundabouts as 'traffic calming' measures and wonder why there are problems.

@Jim - Thousands?, I would wager it would be tens if not hundreds of thousands of pounds!

Years ago I said to a student aiming to become a road planner that the essential problem with her ambition was that if everything works fine in a town you have to go ahead and change it anyway.

After all, if you aren't doing anything people might not notice you are there...

She disagreed, saying that levels of traffic were constantly changing. Maybe, but most of it copes by finding alternative routes. Once however a planning department finds that people are using short cuts or alternatives, they frequently close them or divert the traffic.

Considering how 'environmentally aware' planners profess to be it is amazing how they want to keep vehicles longer on the road with their engines running, pumping out all the nasty stuff (or so they tell us)

Don't be too harsh on the work experience lad, it must be hard going having to to design all Transport For London's pamphlets as well as this council's.

Can someone advise me if there is a recognised qualification to become a "Highway Engineer"? And if so is it administered by the UEA?

I am sick and tired of my money being wasted on idiotic schemes like this.

Another thing they seem to like is designing extremely bad road layouts. Look at the following example:
http://i55.tinypic.com/28hpt94.jpg

The lefthand roundabout isn't too bad, but the other is deliberately offset. Now it's hard to get motorists to obey proper lane discipline at the best of times, but using this I'm constantly faced with a dilemma. If I am travelling from left to right and not going into the superstore, do I use the left lane (correct as I'm taking the second exit), or the right lane which everybody else does because they think they're turning right?

Both those junctions were built with 4 exits, and all are now in use as the waste ground is being developed into housing. So there was NO excuse for poor layout, yet these fuckwits are probably on six figure salaries....

The Institution of Highways Engineers

@ phiangle - Thanks. From a quick glance at their site I found these quotes:

I rest my case....and I suspect Julia will also.

Cookoo Corner? Is that where he councilors live?

Google 'Hans Monderman' for an interesting take on traffic management.

If you start with the assumption that all traffic engineering is designed to soak up money and impede traffic, it all suddenly makes sense.

No really, it does. I'm not kidding. That really is the agenda. And it's very successful.

They're not stupid, they're malicious.

"Eventually, after much local opposition and several people getting knocked down by cars, they deigned to replace it with traffic lights."

I can see that happening here too...

"... if everything works fine in a town you have to go ahead and change it anyway.

After all, if you aren't doing anything people might not notice you are there..."

"Love how the council just simply denies traffic has become worse, I mean surely the councillors use this intersection too. "

"I rest my case....and I suspect Julia will also."

Says it all, doesn't it?

The most recent of these "massive improvements" I can remember has to be the unholy mess Coln has made of its road network. Colne is a town on a ridge. The M65 terminates just outside the town, and feeds onto the A6068. This has always been a bit sluggish in rush hour due to the sheer amount of traffic, but the decision to put traffic lights onto the main roundabout on the route has to rank as the most gibberingly idiotic one ever.

It is now quicker to avoid the bypass and drive right through the town centre, such is the delay caused by the lights. It is even faster still to use a grotty back-road to avoid the area altogether, but as the local council don't often grit this in winter, you're stuck with trundling through the town centre dosing the locals with diesel fumes when the weather is icy.

Truly the road planners of this council want sacking, and replacing with a couple of monkeys.