A Lie Can Be Half Way Around The World...

...before the truth has got its boots on. Even more so, in the digital age. Yesterday afternoon, this story started flooding the social media: 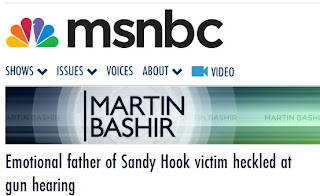 Red meat to the hoplophobes and the people who are determined to advance their gun control agenda (which isn't going to stop at 'assault rifles', is it? Or apply to anyone other than the law abiding citizen, either...) no matter whose corpses they have to stand on to do it, it was quickly picked up by the British press:

And prompted the usual OUTRAGE!! from the left. It provoked a Twitter debate from those who - like Fox Mulder - wanted to believe: 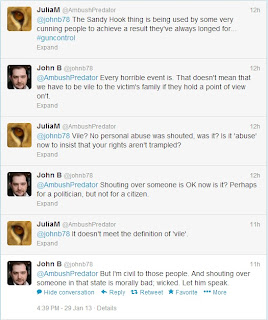 And it turned out to be not a visitor from another world, but just swamp gas after all:


The problem is, that wasn't what happened.

The Daily Caller posted a full video (included here) of the hearing, and the true context of the incident (at the 15 minute mark of the video) is shown. Heslin was not speaking of his son, but rather about the idea of passing restrictive gun laws. He then asks the panel moderating the discussion if they have a good reason why certain guns shouldn't be outlawed. He waits for a response, but no one speaks. He then asks the same question of the audience several times, insisting if anyone in the room has a reason, to speak up.

After several moments of silence, and more insistence from Heslin, several people do respond, mentioning the Second Amendment.

As the video shows, the respondents did not mock or heckle, and responded as respectfully as possible given the emotional situation. The moderator then asks for the audience not to speak up, or the room will be cleared.

But should anyone be surprised at this? Really?

And even if they print retractions in the wake of the revelation (and most won't, despite the fact that those with comment sections are getting hammered in them) does anyone think they'll learn from this?

I don't. Nor does anyone with an ounce of common sense.

They have an agenda and they are going to push it, no matter what.
Posted by JuliaM at 08:45

One thing worth noting is the bereaved father is holding a picture of his baby son not his son as he looked aged six. Why?

And this is what we're fighting in ever decreasing circles.

"One thing worth noting is the bereaved father is holding a picture of his baby son not his son as he looked aged six. Why?"

"And this is what we're fighting in ever decreasing circles."

And why we must never give up fighting them!