What Is It They Always Say? Follow The Money!

...and oh, boy, they certainly intend to: 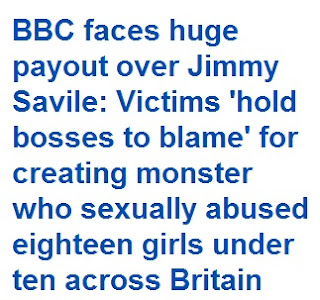 But remember, it's all about 'closure' for the victims (if there really are victims), and justice at last (though a dead man can never be tried, at least under current law, but surely we wouldn't overturn laws to please a mob, would we?). Not about filthy lucre, oh, dear me, no! Perish the thought! How very dare you suggest it!

Nor is it about the rapacious demand for control and surveillance and the burdens of a state that distrusts everyone all the time. Oh, dear me, no.

I look at this circus, this return to the Salem Witch Trials (but hey, they were one up on us, they at least accused live people who could mount a defence!) and I think we've gone stark, staring mad. Maybe it's something in the water? It's a brave blogger or journalist who will swim against this tide.

I'd feel sorry for the BBC, but then I remember they've played their part in fostering a culture which leads to this sort of thing.

And then I remember whose money it is that the BBC will be handing out...
Posted by JuliaM at 09:30

I've no sympathy for the BBC whatsoever. The BBC has been cheerleader for the mindless, self-indulgent 'permissive society' that Jimmy Savile personifies.

The BBC has sown the wind - let's hope the whirlwind arrives very soon.

At least at the Salem witch trials they had the excuse of ergot in the bread making them trip out.

I could never stand Savile, but at this rate it wont be long before they parade his remains through the street, stick his skull on a pole outside television centre, why am I reminded of the monkey hangers of Hartlepool

Anna Raccoon has had some interesting articles on part of this topic.

XX Maybe it's something in the water? XX

FLOURIDE I tell you!

It ALL started to go down hil when they put FLOURIDE in the water!!

Only last week Lawyers for the "Victims" of Savile were looking for the 20 million he has supposedly salted away, not content with the 4 million he actually left in his will (well It'll be about 40 quid each at the rate the "victims" are currently turning up at won't it?)

There is no denying that Savile was a very creepy and suspect bloke. I knew that the first time I laid eyes on him on TOTP in 1964. But all I have heard so far are allegations upon allegations, and not of rape but mere groping.

We are now treated to a senior Police Officer leading the investigation boldly saying that Savile thought of nothing else but abusing children his every waking moment. How fuckin absurd is that statement?

No more than you, Melvin.

Rather than the licence payers funding the payout, why not go for those who were running the BBC at the time? They were in charge, therefore they are responsible.

XX
We are now treated to a senior Police Officer leading the investigation boldly saying that Savile thought of nothing else but abusing children his every waking moment. How fuckin absurd is that statement? XX

Not only absurd, but WHERE is the evidence????

Hay, I tell you what; "I was raped by calligula, I want my moment of fame, and I want my MASSIVE bank account after the "hearing"!

Whatever happened to the world famous "British justice"?

They were in charge, therefore they are responsible. XX

WHERE is the EVIDENCE?

That noise you can hear is lawyers beating on every door

You get my bastard computer to accept the HTML codes for italics here, and I will stop using capitals as a replacement.

If that don't work then, yeah...your computer is a bastard :)

On the subject of compo...I see lots of quotes from people purporting to speak on behalf of the alleged victims but I've yet to see one from the alleged victims themselves saying they're going after his money and that will do nicely, thankyaverymuch.

If anything damages the confidence of genuine victims in coming forward it's the circus that's then generated by all around them. The crime committed against them, the damage done to them and what should be done about it is completely lost.

They then end up as collateral damage in the game vested interests play kicking them around like footballs. Abused twice and thrice over.

If I ever had been I might well have kept my mouth shut, if only for that.

"I've no sympathy for the BBC whatsoever."

Oh, me neither. But I fail to see why license payers should stump up for the compo!

"At least at the Salem witch trials they had the excuse of ergot in the bread making them trip out."

"Anna Raccoon has had some interesting articles on part of this topic."

Indeed she did - earned my 'Blogpost of the Month'. If I awarded yearly ones too, I suspect she'd have won that...

"How fuckin absurd is that statement?"

Well, very. But I think the 'Savile held black mass at Stoke Mandeville' story tops it, don't you?

Who is instructing the solicitors then?

If that don't work then, yeah...your computer is a bastard :)XX

Aye. I KNOW how it works, in thory, but most times, when I try, my computer throws a wobbly, and chucks me off the site.

When I use the works computer, no problems, but my own....

"Who is instructing the solicitors then?"

Solicitors do...and say...whatever The Law allows them to do and say. What the client originally wants to do or say is by the by. See also: Criminal Defence.

I just wouldn't rush to judge any genuine victims with the same filthy brush as the false or exaggerating accusers and especially based on the actions and words of the overblown, hysterical bandwagon-hopping of their "advocates".

I also suspect that for every one that speaks out there are ten more who don't. Not least because for my mother's generation the attitude was and to some extent still is "christ, it's only sex...people enjoy sex, right ? So what the hell are they complaining about ?" :/

"when I try, my computer throws a wobbly, and chucks me off the site.

Sounds to me like a short of some sort between your shift and ctrl button...if I hit the ctrl button instead by mistake that happens to me, too.

Gunk under the keys ? Perhaps try a different one or...urgh, clean it.

"though a dead man can never be tried, at least under current law"

Well they're planning on posthumously stripping him of his knighthood. Even though the knighthood actually disappears on death.

"Sir Jimmy Savile could be awarded a posthumous knighthood – so he can then be stripped of it.

The bizarre plan is being considered by the Honours Forfeiture Committee because knighthoods cannot be removed from people who have died."

Greencoat I agree with you BBC is heartless to the cause