Physician, Take A Good Look At Yourself In A Mirror...

Over at CiF, another broadside against the awful terrible Tory (actually Labour!) policy that sees those in receipt of state benefits being asked to justify that they are applied correctly:


The assessors do not ask GPs like me to provide any medical information about patients to help them make their decisions, even though someone may have received incapacity benefits for many years.

The GP herself - who remains anonymous, of course - shows no insight as to why this might not be considered such a good idea.

And of course, the comments are filled with those supporting this idea, and hurling invective at ATOS. This one, in particular, sums up so many: 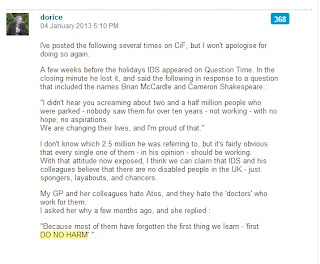 Ahhh, yes, the idea that the medical profession are modern saints, always thinking of the best interests of the patient, shunning the modern capitalistic drive to create easy 'get out of jail free' policies...


Who would have thought that the future of weight loss might lie in the hands of the inventor of the Segway? Dean Kamen, creator of the two-wheeled wonder, along with a team from Aspire Bariatrics, of Philadelphia, has applied for a patent for a pump that can suck food and drink straight out of the stomach.


Users are able to stuff their face before draining their stomach by connecting the pump to a valve surgically installed in their abdominal wall. The makers hope to use it to treat the morbidly obese, and to provide an alternative to a gastric bypass.

Oh, good grief! Well, surely no doctor would countenance this?


Initial setbacks – and here's the really yucky part – have occurred because the pump struggles to break up large foods. One patient reported "clogging" and had to avoid eating cauliflower, broccoli, Chinese food, stir fry, snow peas, pretzels, chips and steak. No chips? It will never catch on.

Don't worry. I'm sure it's just a minor setback. And I'm sure no-one from the 'do no harm!' medical profession will prescribe it.

'Users are able to stuff their face before draining their stomach by connecting the pump to a valve surgically installed in their abdominal wall.'

As a metaphor for contemporary Western culture, that takes some beating!

I've seen an ATOS report on a friend of mine though. The first few pages were what the person who met and assessed my friend wrote. The rest was the judgement by ATOS. The judgement directly, factually contradicted what the assessor had very clearly written despite the fact that the person writing the judgement had no other information than that given by the assessor.
Surprise, surprise, the judgement was that my friend should lose benefits.
Let's not pretend that the ATOS system is about being a fair rational judgement of people's capabilities. It's about getting people off benefits regardless of the state of their health.

To be fair, ATOS appears in Private Eye on a regular basis and on apeal something like 60% of theie results are overturned whihc costs the taxpayer and the person money (don;t know why they don;t have to meet hte costs of the appeal - might get it right first time then)

"As a metaphor for contemporary Western culture, that takes some beating!"

"Let's not pretend that the ATOS system is about being a fair rational judgement of people's capabilities."

What, we should judge on a few isolated examples of them getting it wrong instead?

By that token, nothing works!

"...don;t know why they don;t have to meet hte costs of the appeal - might get it right first time then..."

Ah, if only I wrote government contracts. It would be in there, you can bet!

"the best interests of the patient, "

And more on topic:

Do the people using these things not CHEW their food before swallowing it??

Or do they just ram whole cauliflowers[1] into their mouth an immediately swallow it?

[1] Yeah right. The reason they're morbidly obese is because they're eating their five-a-day, rather than - say - stuffing multi-buy bags of crisps down their gullet.

I think that with a dozen doctors being investigated, for, among other things being unlicenced for UK practice, there may be legitimate reasons for concern. That's without over 40% of claimants passed for work winning appeals against the decision.
Personally, if I was an unwell person being assessed for work ability, I may reasonably assume that I was not getting a fair hearing if I was assessed by an occupation health "therapist".
For those interested...the assessment test starts by getting people to attend a place over a dozen miles away....if they are so unwell they cannot make the trip they fail for non-attendance.....if they manage to attend they fail because they could make it. Monty Pythons all over again !