I thought this year, for my regular monthly break from the state of the world, I'd pick out twelve examples of art that I like. Don't worry. They won't, I'm sure, all be highbrow :)

So without further ado, January's pick is this Turner painting of Whitby: 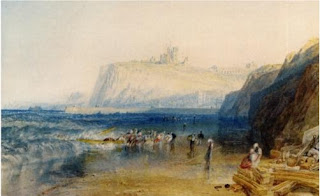 Don't get me wrong, I like all other Turner paintings too - but the ones that you see everywhere, like The Fighting Temeraire or The Burning of the Houses of Lords and Commons don't move me quite so much as this very much lesser-known work.

Perhaps it's the rich colour, and the fact that (unusual for Turner) people are front and centre in the scene. Perhaps it's because, like Woman on a Raft, I know and love the town itself. There's another painting from a different angle, but it lacks the industrious fisherfolk that gives this one so much life.

Sadly, in modern Whitby, landslips look likely to change the town itself permanently.

There's a Royal Academy exhibition (closing next month) that showcases some of Turner's work. I don't think this will be one of them, sadly.

Next month: unknown
Posted by JuliaM at 13:30

Turner's style captured the chill of austerity and Northern peasantry, Julia. And your sincerity as a Whitby fan cannot be in any doubt, having mentioned that rather obvious link to Flowergate Gallery, Grimshaw and Sutcliffe.....what's that?

But are they fishers or are they engaged in the alum trade which was once a key feature of Whitby?

I love the way Turner painted light. So ethereal. And then some bastard thought it a good idea to offer a prize for highly dubious conceptual bullshit in his name. What irony.

You couldn't make it up.

Sorry Julia - as a former Whitby resident, the Turner treatment doesn't impress at all. There are better examples amongst lesser known artists but I realize "better" is a debatable word here.

'Welcome to Yorkshire' reckons they are salvaging a ship's mast from a wreck.

Thanks for the link.

An inspiring subject for the break, too. Please indulge me for this Turner anecdote which is not widely know, I believe:
Turner was painting al fresco - possibly on Hampstead Heath - when a lady (not knowing who he was) looked at the painting, looked at the sky, then at the painting again, and said "I can't see clouds like those". Turner replied, "Ah, but don't you wish you could?"

Julia - I presume you know Atkinson Grimshaw's Gothic representations of the town.

Julia - maybe Turner went in for this sort of thing in Victorian Whitby lodging houses. I've heard it can go on.

I thought it was a gentlemen referring to the sunset in the Fighting Tremeraire. Spike Milligan relates something similar in one of his WW2 books in a conversation he had with a captain whom he was driving.

That'll get me on watchlists I probably wasn't on before!

"But are they fishers or are they engaged in the alum trade which was once a key feature of Whitby?"

Or possibly salvaging a mast, as WoaR suggests?

" And then some bastard thought it a good idea to offer a prize for highly dubious conceptual bullshit in his name. What irony."

Indeed! What an insult.

"Julia - maybe Turner went in for this sort of thing in Victorian Whitby lodging houses. I've heard it can go on."

Yikes!! Those Grimshaw depictions are indeed stunning, though.

It's as my Dad always said "Whitby is the centre of the Universe".

Shocking to see the cliff landslip so close to the church where my folks married, I was Christened and my Grandfather and Uncle rang the bells, bloody Algerino's.