How Not To Represent Your Company On Social Media..

Some company Twitter accounts are worth following, having the right mix of humour and interaction with their followers with the official message. Accounts like c2c, Solihull Police and BBC Travel, for example.

And then....there's the ones who show how not to do it. 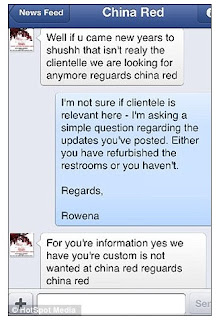 And I'm struck not just by the passive aggressive tone and the 'digging yourself a deeper hole' of the exchange, but the appalling spelling & grammar! If this is an official account holder, what impression would that give you of the company, even if they weren't using it to abuse their customers?

Macheath notes that we seem to be letting standards drop in speech - we clearly aren't too far behind in written communication either...
Posted by JuliaM at 12:35

If it's this firm (http://chinared-restaurant.co.uk/) the problem might be that the person posting on Twitter is Chinese and doesn't know the lingo very well.

No, it is a nightclub in Brum IIRC.

"...the problem might be that the person posting on Twitter is Chinese and doesn't know the lingo very well."

Even less reason to put them on the 'front desk' of a company's PR tool then!