Local Newspapers Are Closing Their Comments Sections In Droves...


A spokesman for Greater Manchester Police said: "There is nothing to suggest that this wasn't an unprovoked attack.

"The woman has been grabbed, thrown to the ground and the offender has banged her head against the ground, causing injury.

"We have been given a description of a man who was black, 5ft 9in, skinny, and wearing a red hoodie with the hood pulled up and black tracksuit bottoms.

"He is suspected of the assault, but there may be nine other people involved."

Inquiries are ongoing and officers are examining CCTV footage of the attack.

Could it be because they sometimes show things in a rather different light? 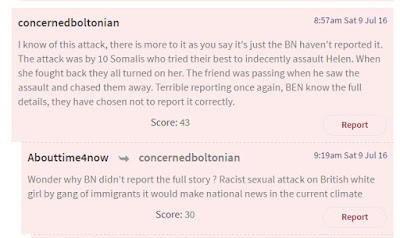 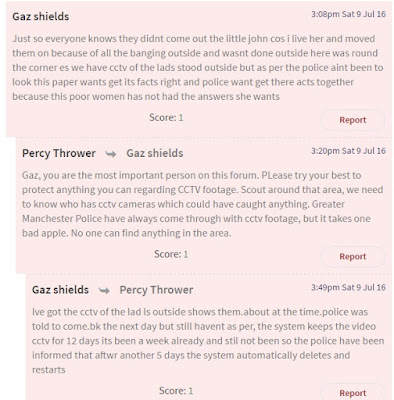 Yep, this. Local newspapers aren't dying because of 'new technology', they're dying because there's a rapidly shrinking pool of people who will pay good money to be lied to.

"There is nothing to suggest that this wasn't an unprovoked attack.

Why not just say "This was an unprovoked attack", which it was, because there is nothing provocative about being white and female.

The important point is that this was a racially motivated sexual attack. If a gang of white men had surrounded a black girl, that would have been reported in detail.

What language is Gaz writing in please...?

"...there's a rapidly shrinking pool of people who will pay good money to be lied to."

"What language is Gaz writing in please...?"