About Those Sentences For Knife Crime... 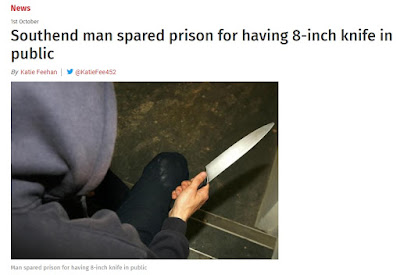 He was found to be in possession of a large kitchen knife with an eight-inch blade and red tape around the handle.

I wonder if he had a reasonable excuse? Maybe he was a chef returning from work?


The 55-year-old pleaded guilty and was handed a four-month prison sentence which was suspended for 12 months.

The chair of the bench stated the sentence was suspended because the defendant had no relevant convictions and pleaded guilty at the earliest opportunity.

Not 'no convictions', just no relevant ones.
Posted by JuliaM at 09:00

Three months per inch over 3 inches sounds fair to me.
Penseivat

Now that's a thing I should support! Given the preference of urban yoofs for samurai swords.