Shocking dashcam footage showed Joshua Gardner, 18, brandishing the enormous blade on a busy south London road before repeatedly slashing at the car and threatening its 19-year-old driver, who got out and ran away.

We all remember the video. And the demands for 'tough action' against knife crime in its wake.

Well, here it is:


But an Old Bailey judge told Gardner he would only be given a suspended sentence because he was wielding the knife after a ten-day kidnap ordeal in which he was held at gunpoint.

I guess that's what appointing a diversity hire (she is the first non-white judge to be appointed to the Old Bailey) gets you.

But maybe he was a first-time offender? No. They never are.


Gardner, who had a previous conviction for attempting to rob a schoolboy of his mobile and wallet at knifepoint...

But still, the poor little victim (no, not the schoolboy, keep up!)! Get your hankies at the ready!


Judge Anuja Dhir QC said: 'There was an incident of kidnapping between about March 26 and April 2, so a relatively short period of time before you committed this offence.

'You were bundled into a car, and threatened with a gun because of a drug debt that a friend of yours had run up.

'You were then taken to a place referred to as a trap house for ten days and you were made to sell drugs to work off the debt.'

The kidnapping, said to be by a gang of men in their 20s, 'reduced your culpability', she told Gardner.


Judge Dhir passed a sentence of two years in jail suspended for two years after hearing of his kidnap ordeal and reading a letter from his mother.

Which reminded me of a Tweet I saw just yesterday: 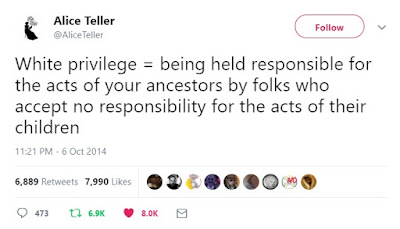 Makes you think. Doesn't it?


Defence lawyer Mark Stevens told the court his client was 'thoroughly ashamed' of himself and for the 'pain' he had put his family through.

'His mother is really looking to move away from the area. It is a completely different borough,' he said.

Yes, it probably is. But that's due to the presence of street thugs like Gardner! Still, it's nice to know some other borough will be enriched by his presence. One can only hope it's somewhere close to Anuja or her kin, but I rather doubt it... 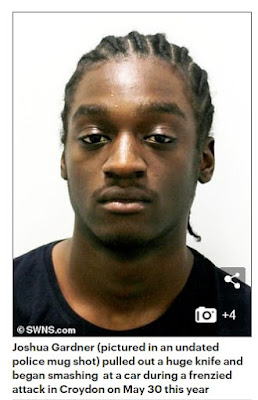 Instead of the powerfully built sullen little animal he is today...
Posted by JuliaM at 10:30

Kinell! His past associations with drug users and dealers should have vastly increased his punishment, not mitigated it

Born to hang. Pity that’s no longer an option at the end of a career of escalating violence.

I really despair: words fail me!

Two points spring to mind. His lovely mother states that they are moving boroughs to get away from Croydon. Slightly bending the truth there...she's being evicted because she and her sons are utter scum and made her neighbours lives a misery. ( I know this for a fact as I'm good friends with the head of the ASBO unit at Croydon Council). She's not doing it for her son's sake, she has no choice. I think a street-parties already been booked!!
Secondly this wannabee gangster will either be dead or in prison for murder some time soon.
Jaded.

"His past associations with drug users and dealers should have vastly increased his punishment, not mitigated it"

"Born to hang. Pity that’s no longer an option..."

"I really despair: words fail me!"

I resort to the sort I couldn't use on this, a family blog.

"Slightly bending the truth there...she's being evicted because she and her sons are utter scum and made her neighbours lives a misery. "

Once, that would be discovered and published by journalists.

Now they are all too busy investigating the home life and past of school bullies who have the misfortune to pick on a progressive BabySeal.