What Took You So Long?

One incredulous rider raises his hands in indignation after he is sent clattering to the ground, and another told police: 'I took my helmet off so I thought you'd stop chasing me.'

Such has been the inevitable reaction to the police going 'softly softly' with young street thugs for fear of criticism or complaints of racism that they are now totally indignant when the police suddenly reverse their approach.

Stop me doing as I please? How VERY DARE THEY!


Scotland Yard chiefs have now vowed to get tough with the gangs as they attempt to take back control of the streets.

They don't seem to have left it too late. Just.

Commander Pearson added: 'We are not complacent and we will continue to work tirelessly across London to maintain this downward trend.'

The question remains, though: why were you complacent before? And I'm not the only one asking this: 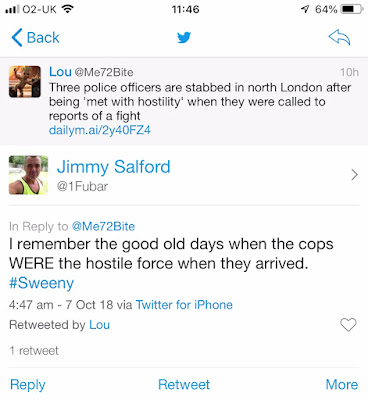 I fully expect this policy to be reversed the minute some dusky youth with an unpronounceable name breaks a bone or two. And our hopeless Met Police Commissioner faces the inevitable criticism from the left wing bleeding hearts.

But let's enjoy it while it lasts.
Posted by JuliaM at 10:30

Email ThisBlogThis!Share to TwitterShare to FacebookShare to Pinterest
Labels: it's about bloody time, modern policing, sometimes you win one, zero tolerance

"...some dusky youth with an unpronounceable name breaks a bone or two..." - Aforementioned demographic frequently breaks/cuts bones; said bones, however, usually belong to someone else.

I take it those plod were given a crash course...

Since this (long overdue) procedure is now acceptable, and the police are appealing for the public to step in and assist with arrests, does it mean I can take aim at any thug I see making an escape? If so, I'll get the welding torch out and make up some bull bars for the car...

When I joined in 1989 scooters and motor-bikes existed then as well. They rarely failed to stop as they knew the consequences. So why have things changed so much?

About 5 years ago a piece of shit in Islington was being chased on a stolen moped and he crashed and died. (Chased not nudged off). The officers faced manslaughter charges and were investigated for years. Said scums parents became (in) famous for harassing the police at crime scenes in the area so we had to back off and this led to an explosion in moped-related crime.
Chases were routinely called off if the scum took their helmets off or drove dangerously so they got carte blanche to do whatever they liked.
However I agree with your point about the first serious injury injury. We will stop then.
Jaded
(PS the Islington boy was white, imagine what would have happened if he wasn't? New TV's and trainers all round!!)

Because the Great British Public hate seeing police go hands on. I'm sorry, but the keyboard rattlers will say how much they like seeing moped riders being knocked off their bikes but the moment it happens in front of them they don't like it. The public generally don't like police chasing people in vehicles.
Ultimately society gets the policing it deserves. Society as a whole has decided it wants to subject police officers to frame by frame analysis of use of force incidents like some sort of rugby TMO. The police have to follow all of the rules/policy or the IOPC will nail everyone involved to the wall. The baddies have a free hand. It's no wonder that pro active police work is declining, this has happened in the states where it is known as 'going fetal' or 'FIDO'. F**K it, Drive on' as officers were unwilling to risk the protracted investigation or didn't want to become a social media sensation. I do agree that the first serious injury will result in a suspension of the policy.
Retired

"Aforementioned demographic frequently breaks/cuts bones; said bones, however, usually belong to someone else."

Though it seems now a few have broken bones, and even Limp Dick is all *shrug*...

"...does it mean I can take aim at any thug I see making an escape? If so, I'll get the welding torch out and make up some bull bars for the car..."

I would say 'Now, let's not turn London into a scene from 'Mad Max', but..

Hell, I could put the Landy to VERY good use!

"When I joined in 1989 scooters and motor-bikes existed then as well. They rarely failed to stop as they knew the consequences. So why have things changed so much?"

Read my lips: No. More. Consequences!

"...but the moment it happens in front of them they don't like it. "

I'm keeping a bag of popcorn on the dashboard for when it does!