Funny, I Wouldn't Hate Anyone Who Gave Me Free Money...

A mother was reduced to tears after she was left with just 74p to feed her young daughter for six days when a Universal Credit payment she was expecting failed to go into her bank account.

Is this another case of the State screwing up?


Mel Whitchurch, 35, and her partner Chris Steer, 39, who live in Preston Road in Brighton, were yesterday desperately rummaging through their home to find things to sell to pay for food for their five-year-old daughter Cheyenne.


Mel, who has back problems and can’t walk, and Chris, who has been signed off work with mental health problems, jointly claim Universal Credit, the new benefit for working age people that replaces six benefits and merges them into one payment.


The couple recently arranged to split their monthly payments into two per month – and although Mel says the Department of Work and Pensions told them the payments would be made “fortnightly”, the DWP says the arrangement is for “bi-monthly” payments.


“They told me it was my problem and they put the phone down on me,” said Mel, who has been on benefits for 11 years and has no savings.

Really? It's their fault you can't budget?


Also worried about paying bills, Mel became distraught when she told how Cheyenne would be the only child unable to take a snack with her when she returns to school on Monday after half-term.


When The Argus spoke to Mel yesterday, a friend had just brought the family two pizzas to keep them going. But after that they only had a few tins of food to last until next Wednesday.

The 'friend' didn't think to buy fresh produce, I note...


This month, the family has received an additional £150 from the DWP to buy a new washing machine, which they have now bought.

OK, that's it. That did it. As it clearly did for the readers. 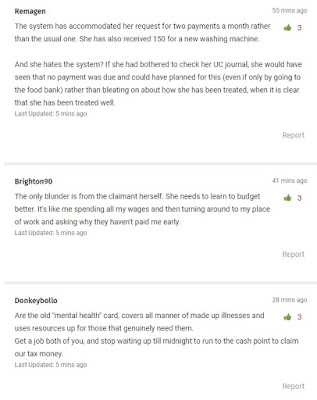 They don't even get the tiny violin, it's wasted on the scrounging layabouts!
Posted by JuliaM at 10:30

"has back problems and can’t walk"
Presumably she could use a wheelchair and get a job. I notice one of the girls at the till in our local Sainsburys uses a wheel chair. So don't tell me there are no suitable jobs.

Mel, who has been on benefits for 11 years

I see she's getting enough from the taxpayer to breed, however.

Are we to presume there's to be a Brianna or Kaiden along sometime soon?

They should have sold the kid

Since it's a question of feeding the child for six days, it is surely not unreasonable to ask what had happened to her child benefit of £20.70 a week, paid separately from Universal Credit.

it is surely not unreasonable to ask what had happened to her child benefit of £20.70 a week

"Presumably she could use a wheelchair and get a job."

"Are we to presume there's to be a Brianna or Kaiden along sometime soon?"

"...it is surely not unreasonable to ask what had happened to her child benefit of £20.70 a week, paid separately from Universal Credit."