They Really Do (Get Mutilated To) Look Like Their Owners...

A Blackpool man had his dog’s ears mutilated in an illegal operation to make him look more intimidating – after telling a friend ‘a dog with big floppy ears... is not the kind of dog I want’.

Simon Broscombe, 35, had his six-month-old American pit bull cross’s floppy ears cut back to short points to give the pup a more ‘street cred’ look.

And does the owner mutilate himself to improve his 'street cred'? 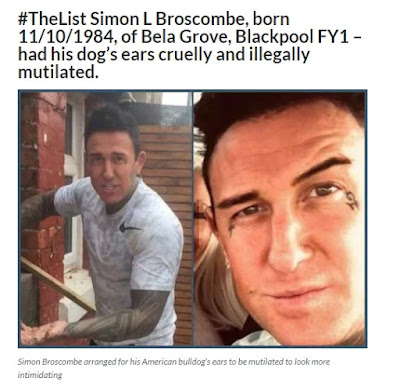 RSPCA prosecutor Paul Ridehalgh said: “This dog is a cross between an American pit bull and American staffie.

“The investigators found pictures of Tyson with his ears intact and the defendant knew that ear cropping in the UK is illegal.

“These ears were mutilated and [Broscombe] would not say who did it which obstructed the RSPCA investigating.”

Then bang him up until he names the culprit!


Trevor Colebourne, defending,said: ”My client bought the dog via a breeder thinking it had had his ears cropped in Holland before being brought into the UK.

“He would not name the person who carried out the procedure as he had been given a threat to keep his mouth shut and not be a grass.”

The dog was destined for illegal fighting, I'll be bound...


Broscombe was banned from keeping or being involved in the keeping of any animal for seven years. He was given a 12 week jail term, suspended for 18 months. He must do 200 hours of unpaid work for the community and must pay £715 in court costs.

It should have been a lifetime ban.
Posted by JuliaM at 09:00

Email ThisBlogThis!Share to TwitterShare to FacebookShare to Pinterest
Labels: a likely story, people who ought to be hung up by their thumbs, utter scum

Just remove his ears: if he wears glasses, that's just too bad.

They should use a couple of bricks to relieve him of his knackers so he doesn't reproduce. We've already got more than enough idiots.

He acts like the big man and bought the dog from preston with its ears but took it to some back alley bloke who didnt even numb them and gave tyson back covered in blood.he boasted about it to everyone thinking it made him look hard, £3000 gold chain?? It was a gold look chain from ebay for 90 quid, his girlfriend Scarlett (no longer a friend) told me everything

So he got away with it then! He didn't go to jail, won't pay the fine and won't turn up for the work. And what ya gonna do about it then?