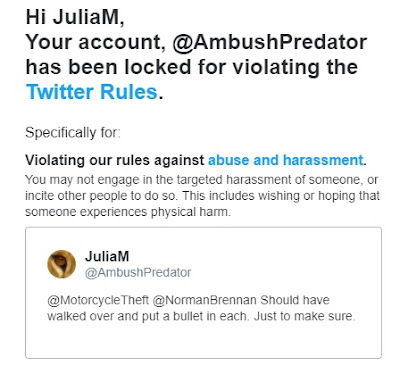 Apparently, suggesting the police should shoot motorcycle thieves they've just knocked off their bike in some South American country is beyond the pale.

You can catch me on Gab in the meantime. And I'll see you in 6 days, Twitter followers!
Posted by JuliaM at 11:00

In the sin bin.
From now on, I'm referring to that Tesla man as 'Convicted pedophile Elon Musk.' If he sues I'll just say it was an insult and not to be taken literally. I strongly encourage others to follow this nomenclature.

I assume it's just a coincidence that a California based billionaire, who employs hundred and hundreds of Californians, whose livelihood therefore depends on him, is tried in a California court, and is found mot guilty by a Californian jury of the allegation made against him. Who'd a thunk it. But then, Just think of the severance notices, leading to foreclosures on mortgages, if they had found him guilty.
It reminds me a Liverpool jury, in the city of Liverpool, finding the Captain of Liverpool football club, St Stephen of Gerard, not guilty of assault after he hit someone three times and claimed self defence (hitting him once is self defence, Stephen, hitting him three times is assault - the first blow being reflexive, the second and third being intentional - but then this WAS Liverpool).
Penseivat

Go to the top of the class: don't take your books, you won't be there long!

Why the hell did they sue Musk in California when the best libel shopping jurisdiction was on their doorstep?

I would guess maybe because some lawyers fancied enriching themselves by this guys life savings (Which might buy a weeks worth of lunches for an expensive lawyer). I also note that "guess maybe" means this isn't a claim of fact thus not libellous.

I was suspended for suggesting that someone who obviously had a uterus (on account of having recently given birth) should not be described as a man. Then I was permanently banned for calling Diane Abbott stupid (and to a third party, I didn't even @ her). According to Twitter that was 'targetted abuse'. Oh well, they know best.

"From now on, I'm referring to that Tesla man as 'Convicted pedophile Elon Musk.' If he sues I'll just say it was an insult and not to be taken literally."

Heh! That IS indeed the consequence of that verdict, isn't it?

A phrase that comes in handy, I bet!

Ooh, I've not heard of that one!

Know best how to drive people into the arms of competitors!