Ex Libris: ‘The Dark Is Rising’

"'Too many!' James shouted, and slammed the door behind him.

'What?' said Will.
'Too many kids in this family, that's what. Just too many'. James stood fuming on the landing like a small angry locomotive, then stumped across to the window-seat and stared out at the garden. Will put aside his book and pulled up his legs to make room. 'I could hear all the yelling,' he said, chin on his knees"

A friend lent me this book when we went on a camping holiday with her family.
It kept me enthralled when - inevitably - it rained for most of the week and playing 'Monopoly' for the fifteenth time palled a little. Luckily we had a lot of reading material between us... 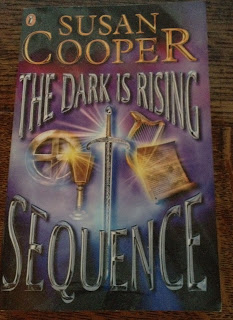 This isn't the actual book that I read, though, that was the scarily-illustrated Puffin softcover, but a modern collection of all the stories in the series that I purchased through Amazon.

Oddly enough, 'The Dark Is Rising' isn’t the first book in the series, either; that book, ‘Over Sea, Under Stone’, however, isn’t critical to the plot and this can easily stand alone, though the later books do require you to have read this one first. I have to disagree with the 'Guardian's' book reviewer, though; my personal favourite is not the Wales-set 'Grey King', but the Cornwall-based 'Greenwitch'.

Forget Rowling’s pedestrian efforts – this is young adult fiction with real bite and thorough research, and weaves ancient Celtic legend and English folklore and landscape into the mix with panache. A website here matches the story to the landscape and location for anyone planning a trip to visit the novels' varied settings.
Putting a ‘Harry Potter’ book next to this is like lining up a Blackpool Sands donkey next to a thoroughbred racehorse. Personally, I think it shows up JK Rowling for the hack she really is; in a just world, Cooper's books would have been the ones that sold trillions of copies...
It's still a teaching resource, with lesson plans and core modules available, though sadly it seems to be mostly for US schoolchildren. It spawned a horrible, horrible US movie adaptation, a true abomination, which I haven't yet been able to bring myself to watch.
It's also been the inspiration for, umm, a 'ambient techno concept album', whatever that is. It made me think my speakers had broken when I tried it, but your mileage might vary...
Posted by JuliaM at 13:30

Thanks for the recommendation. I would have passed this by as a children's book, by the magic of kindle I'll have a sample in about 30 seconds. :-)

The first book - 'Over Sea, Under Stone' - is definitely 'younger' than the others, and closer to the first of the Potter books in tone. But it gets much older and darker as you follow it through.

Would it be suitable for an 11yr old, reason for asking, it's for my grandson, who's an avid reader, but mum (my daughter, shame on her, couldn't read a bus timetable)
and dad tend to vet everything he reads...
If not, I'll smuggle it in, I loved all things dark and macarb when I was young, still do.
Maybe I'll read it first..lol

Definitely suitable for an 11 year old. It was aimed at about 14/15 year olds when it first came out, I think, but they mature faster these days... :)

I wouldn't say it was 'macabre', as such. But it's got an element of real menace to it.

Julia, I assume you're familiar with John Garner? The Weirdstone of Brisingamen, The Moon of Gomrath, Elidor - they're all brilliant. His best is probably The Owl Service, which really is spooky.

I have a well thumbed and rather battered omnibus edition and it has remained one of my favourite reads for many a year. Thanks for reminding me to take it out and give it another read.

"...I assume you're familiar with John Garner? "

Very much so! I loved those. And ITV (I think) did a decent adaptation of 'The Owl Service'.

"Thanks for reminding me to take it out and give it another read."

I often haul this one out and read it at Christmas... ;)

And I remember reading these Susan Cooper books many years ago—must be nearly thirty years...

For me, though, no one beats Dianna Wynne Jones.

Just to say, I'm on book 4 now. I can add my recommendation for this series. Thanks Julia.