A Headline That Gives One Pause… 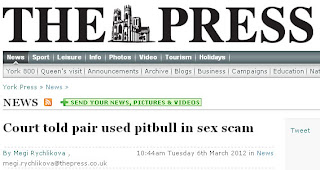 …but the story itself isn’t quite what your fevered imagination may suspect:

Emily Anne Akers, 23, took money from the would-be clients at a flat in Heworth before her boyfriend Carl Wesley Mason, 31, suddenly jumped out with a pitbull-type dog, a York Crown Court jury was told yesterday.

One of the men, identified in court only as Mr Brown, accidentally left his Blackberry phone at the scene, and Mason then threatened to send photos of Mr Brown with Akers to all his work contacts, unless he handed over £5,000 in a supermarket car park, Mr Storey told the jury.

Yup, the old ‘rip off the client’ trick. The police will take a dim view of that sort of…

A police community support officer cycling past intervened and, after speaking to Mason and Akers, told the client to go home and regard it as an expensive lesson because he could be implicated in an offence of “looking for sex”.

And that outweighs theft, threatening behaviour and blackmail, clearly…

The client said he was angry after the officer had gone and banged on the couple’s door again. Mason came out waving a golf club in one hand and holding the dog on a lead in the other. Then Akers sprayed him with something red that gave him a rash.

I wonder what the PCSO would have said to that?
Posted by JuliaM at 13:15

Whats it all about Ambush, these moronic news stories?

When your name appears in a blog list then you just know its the same old ,same old shite.

nothign original, nothing just nothing, not even worthy of trolling.

If it isn't worthy of trolling, then why did you bother?

And in other news...

Your Anon writes remarkably like my impostor, Julia. As for your material source, much of it would go unnoticed, if it were not for your efforts.Keep it up.

or if you like "continuing evidence that despite all the bluster and 'lessons will be learned' type standard PR crud that one hears time after time after time, nothing is every learned, it is always easier to find some reason to vilify the victims, our protect and serve guardians are best at protecting and serving themselves" ... When the day ever comes that people aren't announcing another "nothing changes, same old, same old .." we will all cheer ... until then, bringing instances of "same old, same old" into view is a public service, showing the public how it so often isn't served, well apart from being served up contempt ...

How utterly bizarre that the guy felt far more threatened by the words of thinly veiled threat from the likes of a PCSO than the physical actions of lawless thugs with weapons and a pitbull.

Leg-iron has it right....some really do live in a panopticon of their own choosing.

Guess the moral of the story is 'don't take your phone with you when you go whoring' - wise words, Ezekiel 12:6 maybe?

For people who have very limited powers & very little training, PCSO's seem to take an awful lot upon themselves ..

Its high time that the drivel spouted by these monkeys was challenged in the courts ..

could be implicated in an offence of “looking for sex”.

So, you whinge because he attended, but if he hadn’t attended? It’d be ‘Waah, we are being disrespected!’.

I’d have thought some of you might have grasped that. But no..

JuliaM; why do you still come on here? You were nearly hounded off the comment page for your offensive comments only last month. Now you accuse grieving people of ‘whinging’.

Do you never learn?

I’m guessing, Hank, even you’ve realised by now I’m not susceptible to hounding?

I don't see your problem wit the PSCO's stellar effort here -- it's the new policing efficiency drive: a plastic cop acting as a police officer, prosecutor, judge and jury combined.

I can't honestly say I actually detect a drop in the 'quality of justice' served, and it saves a lot of money and time.

What is not to love?

Are not Australians allowed to look for sex.
No wonder there is only a tiny population there.

"Whats it all about Ambush..."

"If it isn't worthy of trolling, then why did you bother?"

Yup, I suspect so. If it looks like it's doing any impersonation, I zap it.

"How utterly bizarre that the guy felt far more threatened by the words of thinly veiled threat from the likes of a PCSO than the physical actions of lawless thugs with weapons and a pitbull."

The thugs can break your bones, the dogs can bite...but get caught iup as an innocent man in the criminal justice system, and you can be utterly ruined.

"For people who have very limited powers & very little training, PCSO's seem to take an awful lot upon themselves .."

Or you get the sort that stand there and do nothing, quoting H&S, while people drown...

Indeed! Throw a fence around the UK, we're all guilty!

Anon at 21:25, flattering as it is to have a creepy stalker fetching my words back to me from other blogs, did you have a, you know, point...?

"I can't honestly say I actually detect a drop in the 'quality of justice' served.."