Dog Attacks: I Don’t See Why We Should Worry About ‘Privatised’ Police…

…after all, it’s not like the supposedly-impartial service they offer couldn’t be done just as well by anyone else prone to jump to conclusions, is it?

“As I was walking past it looked at me and then jumped,” he said. “It wiggled me about and threw me on the road.”

… Norfolk police confirmed they were investigating the attack.

The owner apologised but Anita, 28, believes the dog should now be muzzled to stop any further attacks on children in the area.

The mother-of-four said: “The dog just went for him. When I told the police they said, ‘what did he do to provoke it?’ “My son was just walking back to his mate’s house. He has got three puncture wounds and a massive chunk of skin missing and massive bruising. It was completely unprovoked. He is in a lot of shock.”

What happened to ‘Just the facts, ma’am’..? Oh. Right. That was so long ago, and in another country…
I wonder if anyone's asked the five police officers serving that warrant on Thursday if they 'provoked' the beast? I bet they wouldn't be all that chuffed to be asked that, as they lay in their hospital beds.
I bet, as a result of that, they'll be a lot less prone to brush aside reports of dog attacks (like the one described in comments) on civilians in future, or to fail to act on reports of serious injuries, especially at addresses they may one day have to visit.
As the comments point out, they've been well and truly hoist on their own petard in this incident, and there's not a great deal of sympathy: 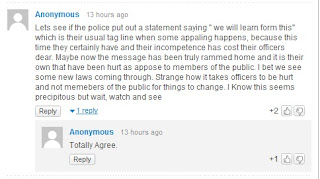 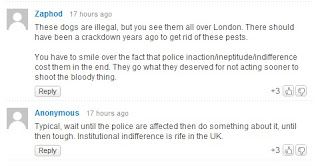 Now, while no-one should want to see anyone hurt, the dangerous dog phenomenon is the inverse of the serial killer phenomenon.
When a serial killer is discovered, the neighbours are all 'Oh, really? Gosh! Dave, you say? Well, he was such a nice, quiet guy! Grew lovely daffodils...'.
When one of these weapon dogs - because that's what they are, despite the 'Mirror' referring to it as a 'pet' yesterday, it's no more a 'pet' than its owner is a 'musician' (cellist? the triangle? place your bets..) - goes berserk, the paper is usually full of neighbours pointing out how it has attacked before, it was clearly dangerous, everyone was afraid of it and nothing was done.
Perhaps now, something will be done. And not the usual blanket something, sweeping up family pets and weapon dogs alike, but targeted action focusing on just these sorts of areas, just these sorts of owners, and just these sorts of dogs.
The police know. They have the information, even if they haven't always shared it with their own people. Up till now, they've lacked the impetus.
I'm hoping they now have the impetus. But it seems it's only to protect themselves and other state employees:

The Association of Chief Police Officers has renewed a call to strengthen the terms of the Dangerous Dogs Act after an attack in east London hospitalised five officers.

Acpo's lead officer on the issue, North Wales assistant chief constable Gareth Pritchard, said he wanted dog owners to be prosecuted if their animal attacked police when they were making an arrest in a suspect's home. Currently owners can only be prosecuted if a dog attack occurs on public land as opposed to private property. Pritchard added that any new legislation should cover nurses, social workers and postal workers, who were lawfully entitled to be on private property.

Email ThisBlogThis!Share to TwitterShare to FacebookShare to Pinterest
Labels: ACPO skullduggery, dangerous dogs, I told you so, I want my country back, jobsworths, karma, policing, public sector

"I don't see why we should worry about 'privatised' police."

From the ineptness point of view (and there may be more of that quality to emerge from the latest fiasco) it should prove extremely difficult to get under the level set by the present service.

From what I can make out, correct me if I'm wrong here.
From the dogs point of view, a group of large men dressed as "Ninjas" kick in his door, they then pile in shouting and balling whilst charging through the house, they man handle his owner to the floor, and then wonder why the dog doesn't just sit there with a stupid look on it's face. Is that about the size of it?

Of course you don't count, Britain is a police state, not a democracy.

ACPO may well have jumped on the bandwagon...but seeing as they don't go to jobs it is not for their benefit. They will be rubbing their hands at the prospect of Winsor allowing them to sack these injured officers.

Do we (officers on the ground) fare better than members of the public. Personally, i don't think so. The courts have effectively told us we should be expected to put up with a level of verbal abuse....because we are the police. Verbally abusing an Officer is an offence in many European countries. I think the message is that the British Public is so far ingrained in victimhood and ill-manners that it is pointless criminalising their behaviour towards the police. Most attacks on police get dropped, the last 2 on me have.

So any idea that the law gets changed for our benefit won't convince me.

This is the same ACPO who are currently accused of hiring recently retired members as consultants, isn't it?

in response to "Don't we count?", Julia, the answer is only when we don't cough up enough money in taxes to enable the public sector to live in the style to which they have become accustomed.

A lot of Officers are very supportive of victims of dog bites but that doesn't fit the agenda. Some people don't like the police and won't make statements. Can we condemn them as a whole?

Any way...cue the police abuse. I wish i could generalise all the public in the same manner, but i actually know a lot of decent people outside the job...what a shame. And if anything like that happened to them, i would be urging them to make a complaint for me to deal, same as i would for any member of the public.

Nice dig at the public sector uk Fred....i suppose you are one of those multi-milionaire private sector types whose greed has ruined the country.

It's been a few years since i had labourers waving their wage packets at me as i was stood outside the nightclub waiting to deal with their regular bouts of drunken violence at 3am. Private sector taking the proverbial out of us was ok back then.


Private sector...ok when your making a fortune but when you have ruined it...well lets have a dig at those in the public sector. Don't suppose you are a Tory politician at all....forget it, i don't want to know.

Oh yes, Anonymous. The Police have been negligent in their duties about dangerous dogs for years and the public be damned. Now they are bitten suddenly its a big issue.

I can't begin to tell you how upset we are about that.

"From what I can make out, correct me if I'm wrong here."

No, you're not wrong. The dog is an evident weapon.

But any large, defensive-aggressive territorial breed might do the same, in the circumstances.

"So any idea that the law gets changed for our benefit won't convince me."

Not just your benefit.

Also the posties, the nurses, the social workers (Oh, we know how many dangerous situations the SS go into, don't we?).

"Some people don't like the police and won't make statements."

True. Not this man, though. He made a statement. The police visited the address. And then?

"Oh yes, Anonymous. The Police have been negligent in their duties about dangerous dogs for years and the public be damned. Now they are bitten suddenly its a big issue."

Yes. This. Sorry anon(s). This is the crux of the matter.

While the police are dealing with a dog, they are not dealing with a burglar. While they are dealing with the effects of the 24 hour drinking culture you all wanted (but didn’t want to pay for extra policing resources) they are not dealing with a drug dealer.
I get a bit fed up with armchair critics who think there is a box of police officers that can be opened and rushed out deal with the next complaint.
Now it seems the police have to downsize by 20%, does that also mean that there will be no more laws passed, and those that are in place are going to be reduced by 20% ? I thought not.
For you all you whinging gits, walk a mile in the shoes of a police officer then come back and say something sensible and credible!

"Of course you don't count, Britain is a police state, not a democracy"

"For you all you whinging gits, walk a mile in the shoes of a police officer then come back and say something sensible and credible!"

Once, a few years ago I confess. But I just wanted to make the point that you will never be able to do all that is asked of you. It’s easy for people to say "it should prove extremely difficult to get under the level set by the present service", and sometimes, but not often, that sort of ignorance gets to me.
And for someone to say that this is a police state is beyond ignorant, just plain stupid!

"I get a bit fed up with armchair critics who think there is a box of police officers that can be opened and rushed out deal with the next complaint."

Well, you could always stop dealing with all the Mickey Mouse cases, then?

The 'people being mean on the Internet' ones, the 'people having sex in the open' ones (sent a helicopter for that!) and, as I'll be blogging later in the week, the 'takeaway opening too late to sell hot food' ones...

" But I just wanted to make the point that you will never be able to do all that is asked of you."

Not me. Not any of my colleagues and friends.

That’s my point, you will always find what you may consider bad decisions, and be able to ignore the many good ones as an armchair critic.

Please also be aware that the decision to use finite resources to do something you personally might not agree about (and can easily ridicule), will quite often not be down the lads and lasses at the coal face.