And They Don’t Even Get A Snazzy Uniform…

They may still be at primary school, but these Farnworth children are developing into model citizens.

Year six pupils at Highfield Primary School are already working together to help make the area they live in a better place. And they became the first group of socially conscious youngsters to graduate from the Young Citizens Project, a first-of-its-kind scheme run by Bolton Lads and Girls Club.


Over seven weeks, the group went into their local community to complete “Mission Farnworth” by answering different questions so they could starting thinking about their “social action project”.

This was followed up by asking local people what they thought needed improving in Farnworth and, after analysing the results, they decided to focus their project around litter and raising awareness of the importance of putting rubbish in the bin.


A graduation ceremony was also held for the children to recognise their hard work and achievements. They were all presented with Young Citizens certificate.

“It has been a privilege to work with the school and the young people supporting local residents and, in turn, contributing to their individual personal development.

“To see them do it because they want to see change in their community and make a difference is something Bolton should be really proud of. We certainly are.”

Well, Carly, I’m sure Bolton will be proud of them eventually. If they know what’s good for them. 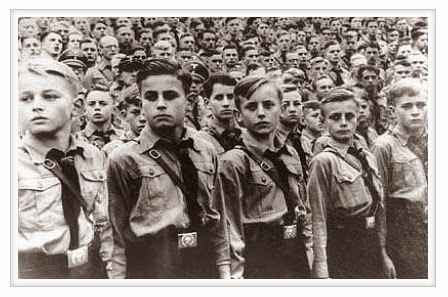 Highfield Primary schoolchildren line up to receive their... what? Oh.
Posted by JuliaM at 10:50

"This was followed up by asking local people what they thought needed improving in Farnworth", not understanding a bleeding word of the responses they got and deciding to concentrate on litter instead, because they could look cute that way.

Sounds like the Scouts/Girl Guides and that's not a bad thing at all. Shame about the bureaucrat-speak it comes dressed up in though.

"not understanding a bleeding word of the responses they got"

Which bit of "fuck off, you poundshop Hitler youth shithead" didn't they get?

We have this and the GWPF report into green brainwashing in schools
http://www.bishop-hill.net/storage/Education-reducedportrait.pdf

Your illustration that accompanies the post is most apt.

Thanks Rightwinggit, I needed a bloody good laugh today :-)

"Shame about the bureaucrat-speak it comes dressed up in though."

Doesn't everything, these days?

"Your illustration that accompanies the post is most apt."

It was, oddly, the very first image that came to mind when I read the article!

"Thanks Rightwinggit, I needed a bloody good laugh today :-)"

Agreed, that was inspired!