...the list of dates for Islamic terrorist atrocities rolls on and on and on. 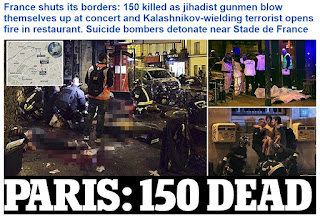 In an effort to escape the charityfest of 'Children In Need' last night, I watched 'American Sniper', an excellent Clint Eastwood-directed biopic of US Navy Seal sniper Chris Kyle.

The film ended, I turned to Twitter to see what was news, and found the initial reports of the latest outbreak of savagery from an alien imported culture.

I knew it wouldn't take long for the apologists for Muslim atrocity to start up, and I was right:


The resentment of disaffected young men and women from a disadvantaged community frequently discriminated against in education, employment and housing has been further fuelled by largely symbolic measures they feel have been taken against Islam under France’s strong secular tradition, such as the 2010 ban on wearing full-face veils in public.

I knew that it wouldn't take long for professional racehustlers to start trying to deflect blame, and I was right: 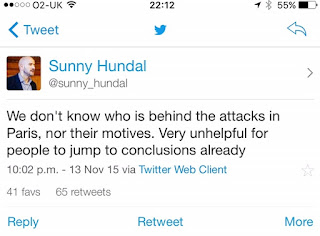 I also knew that the first thoughts of some would be how they could turn this situation to their own political advantage before the fucking bodies had even reached room temperature!, and I was (sadly) right yet again: 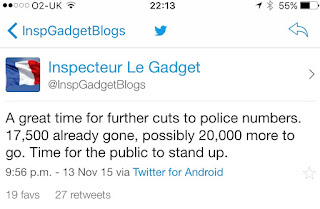 I'm tired of being right.

Tired of being right about the threat Islam poses to our civilisation, tired of watching politicians blindly carry on down the paths of appeasement of a monster that they know has been tried (and failed) before and tired of watching those who loathe their country and all that it has given them scramble for approbation and a seat at the table by refusing to name the monster for what it really is...

No other posts today. JeSuisParisienne.
Posted by JuliaM at 09:00

All predictable - the attack and the reaction.

Expect Muslims to be out protesting that they require respect as in the wake of Charlie Hebdo.

Thoughts after the Paris massacres of 13 November 2015 – Friday the Thirteenth...
1. Suspend Schengen, end all Muslim immigration, reinstitute border controls between sovereign states and return all illegal immigrants to their lands of origin.
2. Suspend habeas corpus for people suspected of terrorist activities and introduce more rigorous methods of interrogation.
3. Institute special courts to deal with offenders and restrict any appeals against the findings of the special courts to a special commission against whose decisions there would be no automatic right of appeal.
4. Either reinstitute death penalty or institute life imprisonment in solitary confinement for the rest of one’s natural life with the daily option of committing pain-free suicide by ingesting poison for those convicted of carrying or storing or being implicated in the use of firearms, explosives or any device intended or adapted for causing the injury or death of human beings, or for conspiring or planning acts of terrorism.
5. Licence mosques and Muslim places of worship and close those suspected or implicated in the radicalisation of their members.
6. Prohibit the building of any new mosques or places of worship, retrospectively restrict citizenship to non-Muslims and begin the repatriation of all Muslims to their lands of origin.
Of course, none of this is going to happen, we’ll just muddle on tip-toeing around the problem.

It is hard to know who is the most dangerous Muslims or their apologists. We have a serious and genuine threat from some who already live amongst us and those who are now pouring over our borders and if the apologists have their way we will do nothing constructive to counter it. If we do not then our culture, beliefs and society is going to be changed in so many ways that do not bear contemplating.

Those who wish to PC correct me because I did not say Islamists instead of Muslims should ponder this. Islam is a political movement wrapped up in religion with imperialist ambitions that uses jihad to achieve it's objective. All Muslims by virtue of the teachings of their faith are obliged to actively or passively support jihad. Even passive support becomes active if it entails not denouncing or protecting those who are actively giving support.

After the Charleston shootings there were swift moves to ban the Confederate flag.

Corby's pals are at it

and his economics guru tells us....

There was an article in one of the papers, apparently Jihadi John has had a child out in Syria and the offspring was said to be a British Citizen. Right where do these idiots get the idea that this child is a British Citizen. They should stop giving away citizenships to any idiot that asks.

Well said, Julia. I feel like saying 'wake me up when the liberals have finally come to their senses and are finally ready to do something'. Though I fear it may be too late by then.

Time to consider allowing citizens to arm themselves. Perhaps there could be employment opportunities for ex servicemen as armed guards at major public gatherings. One armed guard at the rock concert could have saved many lives.

James: 11/3 was the Madrid train bombings.

Andrew: Unfortunatley "One armed guard at the rock concert" would most likely have just been the first person shot, then everything else would have proceeded as it did.

"Of course, none of this is going to happen, we’ll just muddle on tip-toeing around the problem."

"Though I fear it may be too late by then."

I fear that too.