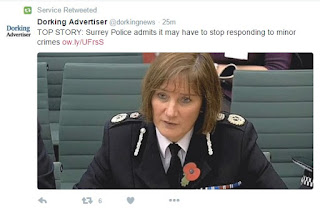 "What's that? You've seen something offensive to Muslims on social media? Well, why didn't you say so in the first place?"


Police arrested the woman from Bicester, Oxfordshire, after people took to social media to complain about the comments.

A Thames Valley Police spokeswoman said: "We have arrested a 43-year-old woman in Bicester today after a number of complaints about a racially abusive post on social media.

"The woman was arrested under section 19 of the Public Order Act which relates to the display of written material which is threatening, abusive or insulting with the intention of stirring up racial hatred, and for producing malicious communications.

"We take all such complaints seriously and will investigate.

"If you suspect that racially aggravated crimes are being committed please report them to Thames Valley Police on 101."

"...after a number of complaints about a racially abusive post on social media..."

I thought the post was about Muslims? And since they aren't a race.....

I do hope this one gets to court so we can get a full explanation of how Muslims are a "race".

Bingo! Muslim victimhood trumps her being of Caribbean background and female.

Well I for one am going to sleep soundly in my bed tonight knowing that the low hanging fruit has all been safely plucked thanks to our brave boys and girls in blue.

Perhaps police should publish a scale of charges and bounties appropriate to their Services. Clients could then contract with their local NPT, opting for an affordable response cover, tailored to specifics detailed in fine print. And police chiefs should be free to exempt favourite Charities and religions of no particular description, from all premiums and property recovery bounties.

.....and the police expect respect?

At one time, we all thought Mullett (A Touch of Frost) was a joke: how in God's name did he become a role-model for these utter waste-of-space senior plod?

Something pointed out endlessly, yet ignored by those nominally in charge...

"Muslim victimhood trumps her being of Caribbean background and female."

The police probably have special rulebooks for determining this. They must have been frustrated D&D GMs...