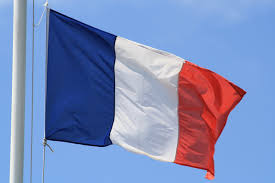 Probably the only time I'll fly these colours, but today wasn't a day for humour, somehow. Normal irreverent Sunday service will resume next week.

Should you be so inclined, other blogs on this theme are below:

David Duff at 'Duff and Nonsense'

And I am mighty sick and tired of seeing this meme all over social media: 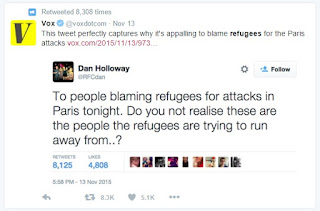 Here's a thought: since vast numbers of them are fit young men of fighting age, rather than women & children, the elderly and infirm, how about they stop running away?

How about they start fighting for the society they want, rather than fleeing to someone else's (and then whinging about the hospitality)?

You face a barbaric enemy bent on total subjugation? Yup. So did we, once. Our men took up arms, drove tanks, flew Spitfires, rather than run to safe territories, leaving the women and children behind.
Posted by JuliaM at 08:30

Our local Chasseur group held target practice yesterday rather than the usual 'have fun on the mountains looking for sanglier'. No need to ask why.

Yes, it was a needless and tragic loss of life, JuliaM. You might have preferred to hoist more specific colours...if Hypocrisy had its own.

No, these 'fit young men of fighting age' are saving their ferocity for when they demand their 'human rights' or for when an innocent Jew passes by....

This is the cost of our 'leaders' trying to outdo each other in showing their bleeding-heart right-on PC credentials by giving OUR country away to the world's lowest. The worm WILL turn, and they fear that. That is why the (hitherto) law-abiding are forbidden from acquiring arms. They're reserved for criminals.

I sometimes run that flag on July 14th.

Thank you Ted Treen, this is the point which I have been hammering at for some years.

Julia, yourcomment yersterday: je suis Française, made me think. Maybe an entrepreneur could introduce a line of pork pie hats with various (intimidating) slogans on the hatband, changing kiss me quick for kill me quick maybe. Wearers would show solidarity with all victims of Islamic violence whilst poking fun at their rather primitive beliefs. I am sure that Jews would gladly join in. That would be my French Connection.

"Our local Chasseur group held target practice yesterday rather than the usual 'have fun on the mountains looking for sanglier'. No need to ask why."