Another Accident Waiting To Happen?

A 16-year-old boy has been spoken to by police in the presence of his mum after following a woman through the streets of Ringwood wearing a Guy Fawkes mask.

Yesterday, the woman told the Echo of her terror as the masked teenager followed her home - even after she had told him he was scaring her.

Hmmm. Is she being a bit over sensitive? Well, maybe.


“I have never had any incidences before and this one has truly petrified me,” she said.

“This was not a group of young lads on the corner drinking and trying to impress peers and being stupid: this man had intent. I turned the corner and ran as fast as I could. I saw a light on in our local community centre and ran to the automatic door; thank goodness it opened for me. If it had been closed then who knows, it’s just too scary to even think about.”


Chief Inspector Simon Tribe said: "We have had a fantastic response from members of the public to reports in the media of a suspicious incident involving a man wearing a mask in Ringwood on the evening of Tuesday, May 10.

"A 16-year-old boy has now been spoken to in the presence of his mum and officers have explained to him how his actions have affected the woman he jumped out in front of and advised him strongly about his behaviour.”

So, just a prank then? But...why does a 16 year old require his mum with him?

Well, as we all know, the best way to find out the real story is to go to the comment section: 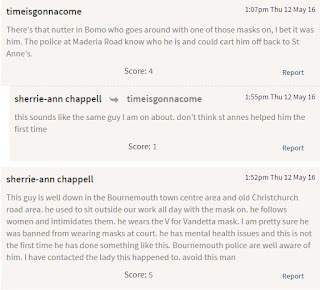 Ah. That puts a bit of a different spin on it! As does this: 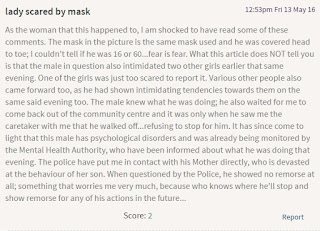 Sounds dreadfully familiar, doesn't it? I wonder if we'll be reading about this nutter again soon.
Posted by JuliaM at 10:30

Just the odd risky, psychotic rehearsal for a rape/killing...not too bad, yet. You see, ladies, there is a better than even chance that the lad won't actually go through with his fantasy. In any event, due to tremendous culinary commitments, absenteeism, personal claims red tape and Facebook, plod have been forced to downgrade the one-off screwball murder and are confining attendances to serial killings of the armed nutter variety.

'But why does a 16 year old require his mum with him?' Because under UK law anyone 17 or under must have a parent/guardian/appropriate adult present.

Apologies if you already picked up this one.

A man was punched in Brighton by a person described as shouting 'all this Muslim stuff'. The police - in the form of Sergeant Peter Allan, the force’s hate crime officer said: “I am saddened to hear of the homophobic assaults in Brighton over the last two weekends".

What the comments point out is that in this instance, the arrested person's identity is withheld ans the police are doing their best not to mention 'the Muslim stuff'. That is not the case if you are that terribly dangerous thing, a 70+ old lady with a surname on the Jewish geneaology lists.

All it takes is someone wearing a Charles the Second mask to give this idiot a thump and he may then realise the error of his ways. Better yet, a Queen Elizabeth the first mask. No man, even a nutter, wants to be given a beating by a woman, unless you're an MP, when it's part of the job description.
Penseivat

With regard to my post at 14.15 yesterday I should also add that the PACE codes of practice are pretty strict when it comes to interviewing anyone who either has, or is suspected of having, some form of mental illness or impairment. The code says an appropriate adult must be present. I agree he sounds like an accident waiting to happen but try and find something to put him before the courts and/or into psychiatric care. That might be a challenge.

"Because under UK law anyone 17 or under must have a parent/guardian/appropriate adult present."

"Apologies if you already picked up this one. "

I saw reference to this on Twitter. I'm surprised it didn't make more of a splash than that.

"I agree he sounds like an accident waiting to happen but try and find something to put him before the courts and/or into psychiatric care. That might be a challenge."

Well, we've just seen three or four women stabbed by another nutter who'd just been bailed. So that might cause the courts to bestir themselves. Or more likely not... :/