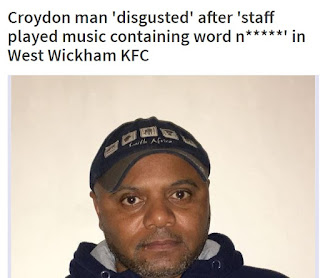 So unexpected.
Posted by JuliaM at 09:30

'Nicked' is a dreadful word in some communities and it hardly surprising to find it on a blacklist. The thought of anyone being 'nicked' in the Croydon War Zone must disgust the majority of the rioting populace as much as that new commercial for turning n****** an honest shade of yellow.

I must give Croydon a wide berth in case I become offended by them playing, "Play that funky music, white boy".
Permafrost

And what was the race of the "artiste" who used such an 'appalling' word: a word which I hear regularly used by a certain community in the West Midlands (not the indigenous white population, I hasten to add).

Was it Oliver's Army by Elvis Costello?

Surely KFC is exactly where you would expect to hear a song about nuggets?

Yeah, I bet it was a 'rap' song too. 'Sung' by people without talent, rhythm, soul or intelligence.

i have seen or heard of him..

The man in the photo looks Indian or Tamul, and most KFCs tend to be Asian-owned and Asian-staffed franchises, so what this is all really about isn't immediately obvious.

"I must give Croydon a wide berth in case I become offended by them playing, "Play that funky music, white boy"."

"The man in the photo looks Indian or Tamul..."

I think it's just a bad photo. Mugshots & passport photos never turn out well, do they?