The Left Suddenly Think Collective Guilt Is Fitting After All...

Two things caught my attention yesterday. The first was this column in CiF in the morning:


Criminal responsibility for terrorism is a notoriously tricky subject. There were some discrete events for which Muslims had little direct responsibility. However, it was Muslims who breathed toxic energy into the spirit of disorder that engulfed the city. And so I return with a message. I write this for my fellow Muslims, the mindless majority who have yet to be blamed, yet are guilty by joint enterprise.

The truth is, as a national religious community it is time to start taking responsibility for our members. The reality is that the corpus of Muslim culture, however much it has improved, still requires surgery. A bit of honesty is desperately required. So let us recap. Muslims turned up in huge numbers to an English city in a country in the middle of a state of emergency. .. They paraded flags bearing the names of the small towns and cities whence they came. They prayed excessively and they sang abusive songs, about Islam, about the English, about anyone who was not Muslim...

An imam who has seen the light?

No. I've changed a few things. This is Tom Walker, a Cardiff barrister, writing about England football fans and the culpability he thinks they all share for those who commit violence abroad. I guess if you are mostly white and British, you can be blamed for anything and everything.

This was followed by the afternoon's shooting of an English Labour MP, and the immediate seizing on initial reports that her (mentally deranged) attacker was reported to have shouted 'Britain First'.

This was gleefully used to good effect by those who really should have known better, even as paramedics worked on the woman: 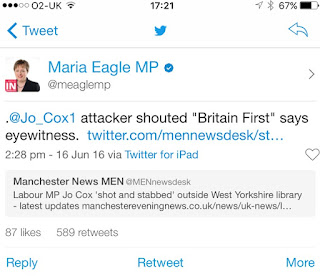 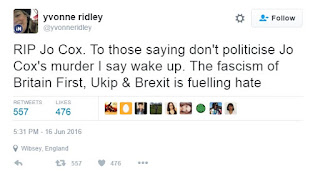 We need more female MPs for a 'kinder, gentler politics', don't we..?

The death brought out the worst in the sort of people who'd damn anyone who might suggest that inflammatory rhetoric from Muslim hate preachers might drive Muslims to acts of terror, all suddenly convinced that this murder must be linked to politics, all without a shred of hard evidence.

The same people that probably scoured the news reports of Omar Mateen's killing spree and sighed with relief when it transpired he might be bi-polar will be demanding you overlook the clear signs of mental illness and vote for Remain, or 'the fanatics will win'...

Truly, if it wasn't for low standards, the progressive left would have no standards at all.

Don't forget that Labour MP Stephen Timms was stabbed by a woman in what she directly called 'revenge for the war on Iraq'. I didn't see the 'Stop the War' lot taking that one on board, did you? She was a Muslim as well, so by the current standards all Muslims are to blame for that one too.

Well said Julia - I cannot believe how this woman's death has been hijacked.

Truly, if it wasn't for low standards, the progressive left would have no standards at all.

Brendan O’Neill on the coverage of Jo Cox’s murder:

“I don’t have very high expectations of the British media. But even I am shocked at the speed with which sections of it have sought to make political mileage from Jo Cox’s death. Pro-Remain journalists, swathes of the broadsheet set, are already discussing her death as a consequence of Brexit campaigning, as a foul spin-off of foul politics. They’re saying that of course Brexiteers aren’t directly responsible, but… that wretched “but”, which means “but they are responsible”. Remainers are already pointing a collective finger at the “political climate” cultivated by Brexit and suggesting it nurtured this murder. I thought they would wait, a day perhaps, before marshalling this tragedy to their cause. But no.

Politically exploiting a murder, morally blackmailing Brexiteers to tone down their campaign, and inadvertently diminishing the culpability of the killer by suggesting “the climate” bears some responsibility for what he did — I think it’s possible the British media has just reached a new low, the lowest low.”

Is yvonne ridley the famous sufferer of stockholm syndrome?

Was it Cherie Blair that said she felt Palestinians felt they had no choice but to blow themselves up?

Perhaps Cherie might feel that old white men feel they have no choice but to attack politicians who ignore them?

Load of old cobblers of course....just trying to understand the mindset of some people. I don't think i will bother trying to do that again.

Anonymous, above. (Sounds like a prayer). You've hit the nail on the head.

And, of course, the saintly Remain campaign doesn't invoke hate and repulsion in any way, shape or form.

I can give lie to that. I've been repulsed by the whole hateful, fearmongering lot of them from the outset.

The death of Jo Cox was a tragedy that occured when she apparently went to intervene in the struggle of two men fighting on the street. The greater tragedy will be if her death becomes the instrument for subverting the democratic process for millions of people who believe national sovereignty and the right to set our own laws aren't the greatest evils the entire universe has ever known.

I'm not responsible for her death any more than Farage, Johnson or Gove are. I won't be railroaded into changing my mind about voting Leave because some shitbag, EU loving authoritarians think I should.

Fuck 'em. Fuck 'em and the gravy train they rode in on.

"I didn't see the 'Stop the War' lot taking that one on board, did you?"

"...I cannot believe how this woman's death has been hijacked."

Sadly, I fear it's only to be expected these days, politics being now as debased a profession as journalism. I fear we haven't seen the bottom of the barrel just yet.

I truly wish it wasn't!

"Brendan O’Neill on the coverage of Jo Cox’s murder..."

He's spot on, though a bit optimistic if he thinks there's nowhere to go but up...

" I don't think i will bother trying to do that again."

It isn't recommended. It gives one a headache, and a nasty taste in the mouth.

"Fuck 'em. Fuck 'em and the gravy train they rode in on."

They should write that on Thursday's ballot.. :D