Maybe 'Demolition Derby Driver' Would Be A More Realistic Goal..? 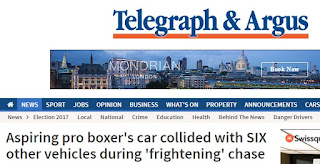 A 25-year-old man, who hopes to pursue a boxing career, has been jailed for two offences of dangerous driving in the space of four months.

Judge Jonathan Durham Hall QC described Theophilus Barrett's first offence last August as "outrageous" after hearing how the speeding BMW he was driving collided with six other vehicles during a protracted pursuit around streets in Bradford.


Prosecutor Graham O'Sullivan said during the pursuit on August 2 another man in the car leaned out of the BMW and pointed a two-foot long metallic object towards armed police officers in their vehicle.

Mr O'Sullivan said the officers initially thought the object looked like a sawn-off shotgun and it was only when it was thrown from the car that it was seen to be a folded up hazard warning triangle.


The court heard that Barrett was given bail, but in November he was caught behind the wheel of a £25,000 Mercedes bearing false registration plates.

After being given bail again he went on to commit the second dangerous driving offence in December when he was spotted by police officers in a friend's Seat Leon.


Barrett's barrister Nigel Jamieson said the defendant realised he faced an immediate jail sentence, but there was a more postive side to his client.


He handed in references from previous employers and said Barrett now wanted to put his idiotic behaviour behind him. Mr Jamieson said his client was interested in amateur boxing and wanted to concentrate his energies on the sport when he was released from prison.

Shouldn't that read 'if he is released from prison'..?

Not a "student"? That's the standard job description when our cousins feature on the front of the T&A

I thought I was just getting old(er), but it really is getting worse all the time, isn't it?

"Not a "student"? That's the standard job description when our cousins feature on the front of the T&A"