"The worst thing about living in the declining era of a great civilization..."

Yesterday, we saw the obligatory round of arrests in the aftermath of the Manchester atrocity - the number is now up to 15, as far away as Sussex - and the (also totally predictable) revelation that this could once again have been prevented.

And also, while these stories were garnering headlines, we saw smaller glimpses into the priorities of the UK Police forces. I won't comment on this, as Fahrenheit211 has said all that needs be said.

And no doubt, some people out there will welcome this action, no matter how utterly ridiculous, because 'racism is bad'.

But it seems that only some racism is bad, in the eyes of the police:


The family of two parents and their five children aged 8 to 15, were playing on the beach when two boys and three girls aged 16 to 18 allegedly ran towards them, hurling stones.

As the attack continued and the parents tried to shelter their children, the family called Kent Police, but the emergency operator advised them that no officers would be dispatched, despite the assailants remaining at the scene.

Instead, they were told that an officer would contact them the following week to “investigate”. 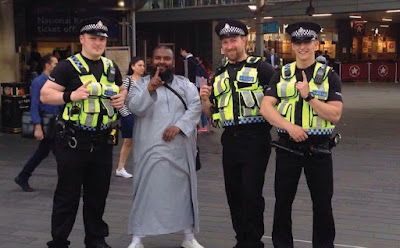 When are we going to wake up, and realise that radical Islam may not be the greatest threat our civilisation faces?
Posted by JuliaM at 09:30

You may enjoy this if you have not already seen this version: 'Come Be PC'

There are plenty of others;'No Rest For The Triggered' is a great track.

Recent data appears to suggest there are 23000 jihadists in the UK which in itself is very very alarming as obviously that number is far above what our intelligence and police forces can cope with. Those 23000 thousand could not continue to exist without considerable active and passive assistance. That assistance can only come from the Muslim community. Which being in the main deeply religious and therefore obedient to the doctrine and dogma of that religion are going to be sympathetic to their more radical brethren. Especially as that doctrine advocates slavery, conversion or death to all non Muslim believers and so those brethren are only actually carrying out the will of their religion and who believe it is their duty to do so. As we have allowed a considerable numbers of Muslims to come and live amongst us and are accepting that more should come are we not creating for ourselves an intractable problem of how our culture and way of life is going to survive.

My great fear is a holocaust mkII. If not here, then on mainland Europe. When the nitty gets gritty I'm ok with getting my hands dirty. But, my God, not that dirty. We are tumbling headlong into the abyss where civil behaviour is not even a memory.

Evidently you're not as 7/7, Rigby, Westminster & Manchester demonstrate

Stop talking, start acting and drive the evil losers out.

Step two: Stop ignoring reports from multiple people that a RoP is dangerous

Mind you, if plod can send a copter and ten officers (got to be at least three cars, then)to a noisy party in Cherry Hinton, it suggests that they are over-staffed rather than under-staffed.

USA sees this on TV News - the truth

Tucker Carlson of Fox News, from an interview with Katie Hopkins earlier this week: "Is a government that is demonstrably unwilling to defend its own children - and they are, despite the slogans and the tanks, this has been going on a long time - is that a legitimate government?"

I know what my answer is.

"There are plenty of others;'No Rest For The Triggered' is a great track. "

"Recent data appears to suggest there are 23000 jihadists in the UK which in itself is very very alarming as obviously that number is far above what our intelligence and police forces can cope with."

It's the writing on the wall, without a doubt.

"...it suggests that they are over-staffed rather than under-staffed."