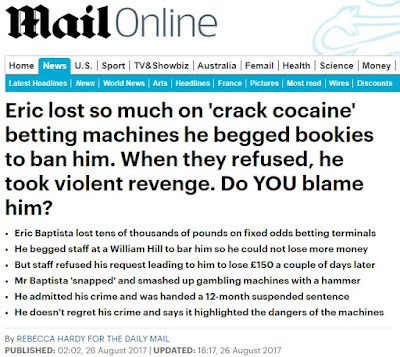 Eric Baptista talks a good deal of sense. ‘I’ve run my own restaurant, so held a bar licence. If you’re too drunk, I can’t serve you any more. I must ask you to leave. Why shouldn’t this apply to bookies?’ he asks.

‘If I’ve spent so much money I’m crying and shouting at the machine — acting irrationally — why shouldn’t someone lean over their counter and say, “I’m sorry sir, but I can’t really keep serving you in your state of mind”?

Because that would be ridiculous?


Eric, who trained as a chef but has also worked as an aircraft fitter and a taxi driver to fund his addiction, is not a stupid man.


‘You might go into a shop with £100 in £20 notes with the intention of spending just £20. But once that’s gone your money just starts slipping into the machine.

‘You don’t want to spend the £80 that’s left but you’ve got no choice. You put it in in the belief that this is an FOBT so if you lose once, the chances must be better for you the second time and even greater the third time. You think, “next time I’ll double it” then the next time you think, “I’ll triple it because eventually my numbers have to come in”’.

Yup! Thick as a whale sandwich.


...as we leave the hotel in which we meet, a waitress takes me to one side. ‘I couldn’t help overhearing some of that,’ she says.

‘Please try to get the government to do something. My brother’s addicted to those machines and it’s wrecking our family.’

Well, I'm sure the government's track record of 'fixing problems' has persuaded you that's a good idea, but it seems you're as dim as he is.

It's called 'personal responsibility' and 'self-control'. That's what you need. Not more government interference.
Posted by JuliaM at 09:00

Email ThisBlogThis!Share to TwitterShare to FacebookShare to Pinterest
Labels: dependency, let the state sort it out, personal responsibility

I am a non-drinking alcoholic. I have been dry for almost thirty years. If I had gone into a supermarket drinks aisle or a public house and smashed everything up do you think the Daily Mail would have 'understood' mu actions?

I reckon not. The point I am trying to make is what is the difference? Why the double standards?

What in God's name do people expect "The Government" (which is just a group of deeply flawed individual humans) to do to correct their own personal idiocies?

I've made all kinds of astonishingly moronic errors in my time. I could point to certain environmental and circumstantial factors as influencing them, but the idea that some outside agency could eliminate said factors would require an act of levelling that would make the Khmer Rouge look like libertarians.

Has everybody just gone bloody mad?

"Why the double standards?"

I really have no idea. But exist they do.

"What in God's name do people expect "The Government" (which is just a group of deeply flawed individual humans) to do to correct their own personal idiocies?"