I Bet None Of Them Live Near This Venue.... 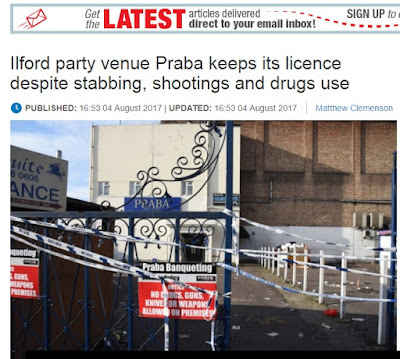 The police’s request to revoke the licence would have forced the venue to close, and was supported by the council’s own licensing team.


But instead of revoking the licence, councillors instead added further conditions to the venue’s current requirements, meaning that promoter-led parties stretching on into the early hours of the morning may now be a thing of the past.

LOL! I wonder how long that will last?


Anthony Edwards, representing Praba, said the suite had “a huge security presence” on the night in question – well above the usual level – with wristbands a requirement for guests. Full searches were also carried out at the entrance, he claimed, and any drugs that were found had been seized.

He said: “We had 29 security staff operating both inside and outside the venue and everyone that entered was made to go through a metal detector.

Wow, sounds like a classy joint indeed! Normal people, seeing more security and countermeasures on a venue than John Hammond's little safari park in South America might well decide to stay in & play 'Scrabble' instead...


“There is also comprehensive CCTV at the site that is being constantly monitored – having inspected the site myself it appears as though the people who got in managed to break through a fence into the smoking area in order to gain access to the premises.”

Without being picked up by any of the 29 security guards or the 'comprehensive' CCTV?


And in response to the stabbing in February, Mr Edwards maintained that the police had found no evidence to suggest the attack had taken place at Praba as no blood was ever found at the venue and the victim was found outside.

Absence of evidence isn't...? Fill in the blank!


Although Praba’s management were at the June event, a Temporary Event Notice (TEN) had been filed by a promoter named Carlos Costa, meaning that all responsibilities for the venue that night rested with him. He had not attempted to run events at Praba before that night, and has not attempted to organise any since.

The fact that a TEN was in place that night, Mr Edwards said, meant any attempt to revoke Praba’s actual licence was “misconceived” by both the police and the council, as that licence had never been in effect that night.

Still, I doubt Mr Edwards lives anywhere near the place, either, somehow...

I would be inclined to turn a blind eye, give them a wider berth and contribute something towards a magnetic wall rack for Bowie knives.

Let us move on, JuliaM. These stabbing instances are entirely cultural and nothing to do with honest, white folk.

Except the trend is spreading.