Speaking after the hearing Mr Donoghue said he was pleased with the outcome, but the trauma of the attack means he has not jogged on the public footpaths near Bowling's farm since.

"I just hope he is going to take more care with his dogs now," he said. "His dogs are dangerous — they should have been put down, or one of them at least."

Well, yes. But dogs are cheap, and it's ensured you keep away, so...who has really won here?


Michelle Brown, defending, stressed that Bowling was of previous good character and, since the incident, has installed another gate to ensure the dogs cannot escape again.

"He is a responsible dog owner and someone who does his utmost to ensure there is harmony between his dogs and visitors," she said. "There is no reason to suggest there is going to be any repeat of this incident."


Giving evidence in court he claimed he had spotted the jogger taking a short cut through his crops and admitted he had been angry when he opened the gate to go and confront Mr Donoghue.

He revealed that he had previously been involved in a dispute with Mr Donoghue's family over some land, but on that day had not immediately realised who the jogger was.

And if you believe that story, would you like to buy this? 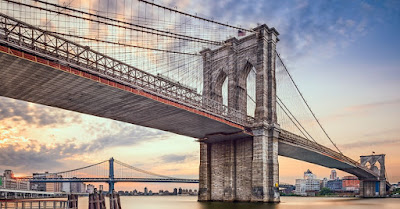 Email ThisBlogThis!Share to TwitterShare to FacebookShare to Pinterest
Labels: a likely story

That bridge is mine! I bought it just before Christmas from one of those nice travelling folk...