Sorry Victor, You're The Patsy...

Victor Oladipo, 18, of Arne Court, Laindon, was due to attend a five-day trial for raiding the home of an elderly couple in Timberlog Lane, Basildon.

He was charged with aggravated burglary alongside Sean Byrne, 30, of no fixed address, and Joe Haide 29, of Lincoln Road, Basildon.

However Oladipo and Haide admitted the lesser charge of burglary on Monday and the Crown Prosecution Service (CPS) offered no evidence in the case against Byrne, meaning he was free to leave court.

Still, having admitted a lesser charge, you'll get a lesser sentence, right?


Oladipo had been bailed to his girlfriend’s home in the lead up to the trial, but after Recorder Pounder told the men they would face a prison sentence, his bail was revoked and he was remanded into custody.

On hearing this, Oladipo began begging the judge to change his mind.


After sobbing in the dock, he stood up and screamed: “It’s not fair.

“I need to see my family. Please your honour.

“I can’t go back there. I need to see my family. What am I supposed to do? It’s not fair.”

Awwww, dry those tears, little thug! You haven't been sentenced yet! There's still time for your solicitor to concoct a sob story:


Oladipo and Haide will appear at Basildon Crown Court to be sentenced on April 11.

Of course, you have to survive remand first: 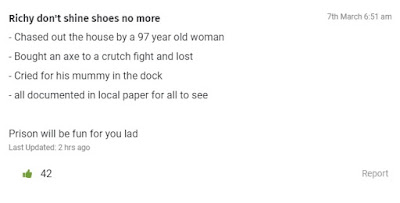 Normally, I'd be suggesting that if the state imprisons you, they have a duty of care. But an aggravated burglary of pensioners? I hope April 11th feels like a long, long time coming....
Posted by JuliaM at 09:00

Email ThisBlogThis!Share to TwitterShare to FacebookShare to Pinterest
Labels: Essex, karma, sometimes you win one, the biter bit

Of course the Criminal Protection Society agreed to the lower charge. They have budgets to keep and successful prosecution targets to meet. The way they do this is as shown above. The court is happy that they will sentence on the evidence given, the defence brief is happy because his client was dealt with on a lesser charge, and the CPS is happy because because both targets were met. The only person not happy is the victim and, as they are considered vexatious irritants, no one really cares about them.
Penseivat

How about making sure that the ODCs in the Remand Holiday Camp know that these thickos picked on defenceless pensioners?

"The only person not happy is the victim and, as they are considered vexatious irritants, no one really cares about them."

A sad indictment of our so-called 'justice system'.

"How about making sure that the ODCs in the Remand Holiday Camp know that these thickos picked on defenceless pensioners?"

Word has a way of getting around, especially these days, when they seem to have no problems getting mobile phones!