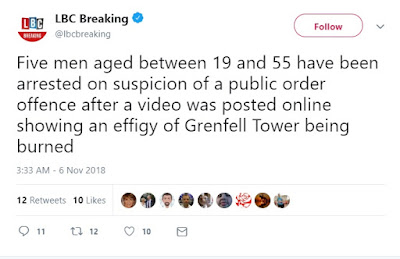 The country is gone. Finito. Orwell was an amateur. He couldn't have dreamed of the sort of hell humans were capable of making for themselves, when we decide the rule of law means nothing, and there no longer remains any adults in charge to check the mob...


A Scotland Yard spokesman said it was 'too early' to state what type of offences could have been committed.

Translation: "We'll have to think of something, because now there's a Twittermob!" 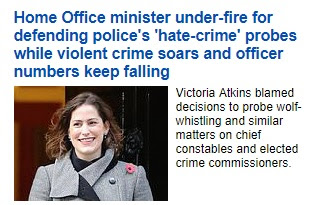 Still, who cares about gang murders, knife crime and muggings when burning someone in effigy has been decided to be the cause celebre, the crime du jour, the... 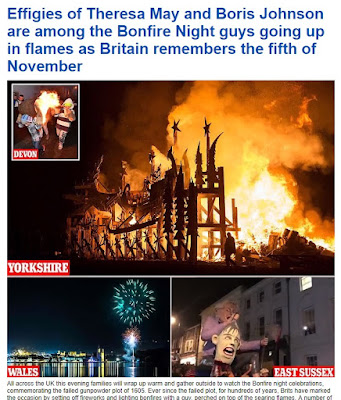 Oh dear, how embarrassing for us. The day after the headlines were about concentrating on proper crime...............
Also this "law and order" government changed the police and criminal evidence act a couple of years ago to make it harder for us to make arrests (and then blamed us for the drop in arrest!!) and if these men handed themselves in I fail to see why they were arrested and not interviewed under caution.
Jaded.

Yes Jaded. It is indeed ironic that we are seeing such overt political bullshit policing so shortly after a senior officer called for the police to concentrate less on matters where people aer whining about being 'offended' and more on real crime. This was not by any stretch of the imagination a real crime that deserved real resources thrown at it

Will plod be over if I tell leprosy jokes in public? They made me laugh my head off as a child.

Minor point here: can an effigy be a building? I thought effigies were people, or semblances of people.

Maybe that was what upset the fuzz: there were cut outs of figures at the 'windows' If so, could be then that was the problem. The building mock-up these men burned was just what it was in reality, a box.

But if a cut out of person at the 'windows' is an effigy, so too is a gingerbread man. What I am guilty of when I bite the head off a Jelly Baby? (The green ones must be aliens, so maybe that's okay...)

Citizens are jaded by that ever expanding manual of Plod Excuses. Taxpayers can only hope that the 2019 edition of Blackstone's Police Operational Handbook, will be fully illustrated and written for the intellectually challenged.

I make a more extensive comment on this appalling incidence of State overreach over at my place. Basically these guys have been arrested because they refused to grieve for a government approved 'grieving target'. It's notable that the Govt wants us to weep and wail over Grenfell but 'not look back in anger' when it comes to Islamic jihadis murdering our children and young people.

"A Scotland Yard spokesman said it was 'too early' to state what type of offences could have been committed."

Then . . . then, why the fuck did you arrest them? Even American cops are savvy enough to have some bullshit to charge you with when they slap the cuffs on you because you didn't 'respect mah authority'.

To be fair John M there's been a few arrests over false compensation claims from the fire. None of them were called Smith, Jones or Brown or similar though.
Jaded


A rotten regime is always sustained by rotten police.

John M.
Perhaps those leaseholders who didn't install fire doors on their flats should be the first to be arrested. Possibly followed by the fire brigade for telling people to return to their death traps?

How Mr Plod would have been under pressure to denounce or preferably fit-up, anyone 'called Smith, Jones or Brown or similar (sic).'

Until some other arrangement is made, the bonfire-night effigy burners must suffice.

"Oh dear, how embarrassing for us. "

That's the modern police 'service', always snatching defeat from the jaws of victory...

Particularly given they have now performed house searches. For a public order offence? Something stinks.

"As someone has already pointed out, not one single person has yet been arrested in connection with the *actual* Grenfell fire."

And I fully expect that no-one ever will be.