Joe Biden’s first day in office delivered an incremental victory for transgender athletes seeking to participate as their identified gender in high school and college sports.

"Wait, so women now have to compete with 'women' with an innate unfair physical advantage..? How is that fair?"

More to the point, what does it look li... 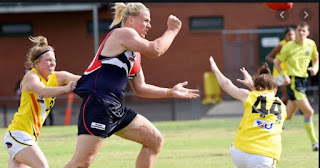 ...the two transgender runners at the center of that case said in court filings that being able to run against girls was central to their wellbeing.

Yes, a guaranteed win is pretty good for one's wellbeing, I'd imagine...

An early test case of Biden’s order may come in Montana, where on Thursday the state’s house judiciary commission voted by a 11-8 margin to advance a bill to the house floor that would prohibit transgender students from participating on school sports teams of the gender with which they identify.

There's only three people without any common sense on that committee? Pretty good odds!

State representative Robert Farris-Olsen, who joined all committee Democrats in opposition, said that passing the bill would violate the right to privacy enshrined in the state constitution and could mean Montana would lose federal education funding, which amounted to $484m in the last fiscal year.

“Not only do we run afoul of the US and Montana constitutions, we also potentially risk all of our federal funding for education in Montana by passing this law,” Farris-Olsen said.

Added Chase Strangio, the ACLU’s deputy director for transgender justice: “Right now lawmakers are not only voting on trans lives but threatening the state’s federal funding.”

I'm sure Sleepy Joe will ride to your rescue. Over the broken bodies of women competitors.

It might be notable that one of their main aims was to keep receiving a big bag of federal money . . .

Just as we, currently, have men and women's athletics, football, rugby, etc, why not have transgender athletics and other sports? I'm sure advertisers would pay handsomely for the tv rights of watching 6'3" bearded athletes called Mavis skipping womanly around an athletics track (am I allowed to use the word 'handsomely' in that sentence?). We could even go further than that. As teachers appear to he brainwashing children that there are 100 genders, the groupings could be cut down even further. I sometimes wonder if I am watching life through a Marx Brothers script, where nothing makes any sense.
Penseivat

Well, if you're not going to stand up to the mentally challenged who think a girlie with a knob is just Fabulous, then there is only one solution.
All the Actual women (boobs and fannies type) will have to stand up and stand together. If some stubbly clown calling themselves Karen insists on being in the running team, NO-ONE runs against them, if they jump onto the basketball court, they are the ONLY ONES PLAYING. Embarrass them at every and all opportunities, until they no longer pull this shit and the schools and colleges become a laughing stock with their two fruitcake teams. When these mental midgets are no longer the centres of attention, this shit will end.

Female athletes (the actual female ones, not the mentally ill pretend ones) are going to have to deal with this themselves by withdrawing their labour. You turn up to an event where a big burly bloke called 'Mary' is competing, then refuse to compete. Let him win on his own. If its a team sport and one side has agreed to have a man play for them, just walk off the pitch and let them take the points. They'll soon get bored with not being able to play their chosen sport. Or for sh*ts and giggles play them once and next time bring along 3 or 4 of your own 'trans' players, who just happen to be 6'6" blokes who play your sport to a decent level, and who have been given specific instructions to target the freak, and make him realise what its like when people with God given physical advantages 'compete' against weaker ones.

That there's federal money to be gained by this might be one reason why the insanity persists, but I fear it's not the only driver.

"I sometimes wonder if I am watching life through a Marx Brothers script..."

They were actually funny. This is sad. And chilling.

"All the Actual women (boobs and fannies type) will have to stand up and stand together."

Some are trying. Not enough.

"then refuse to compete. Let him win on his own."

And be prosecuted for a 'hate crime'?